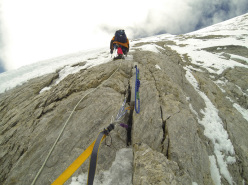 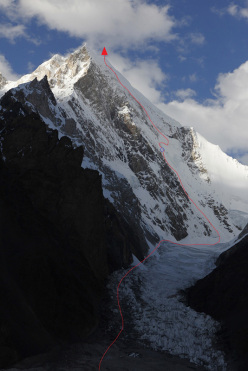 On 25/07/2014 the Koreans Chi-young Ahn and Nak-jong Seong completed the first ascent of Gasherbrum V (7147m) in Pakistan, climbing alpine style via a new route up the South Face. The report by expedition leader Chi-young Ahn.

At the end of July the Korean alpinists Chi-young Ahn e Nak-jong Seong carried out the important first ascent of Gasherbrum V, at 7147m the third highest peak in the Pakistan's Gasherbrum massif. Success on what was widely considered one of the most important unclimbed peaks in this part of the Karakorum came about by forging a new route, up the South Face alpine-style, in four days and with three bivies. The report compiled by expedition leader Chi-young Ahn is published below, what it is missing though is a significant detail: before summiting via the South Face the Koreans attempted a line up the NE Face, but this failed at 6400m due to poor weather, the difficulties of the route and avalanche danger. Together with the other two expedition members, Hyeong-woo Choi and Ji-eun Ahn, they decided to change strategy and attempt the South Face and, with just a few days left prior to departure and still not fully recovered from the previous attempt, Chi-young Ahn and Nak-jong set off upwards, without having established any camps and in a single push...

We left Incheon on June 13 and arrived near the head of the Baltoro Glacier where we established base camp. At 05:00, July 23, Nak-jong Seong and I left base camp (4770m). Near 06:00 we entered the glacier field, and without tying into each other, we moved quickly through the glacial section and reached the Bergschrund by 09:40. From base camp, we travelled roughly 3.5 kilometers through the complexities of the glacial terrain and crevasse sections. We started climbing by 11:00, we gained roughly 1,800 meters of altitude from base camp. We made it to our bivy site by midnight in a slanted crevasse located to the left and part of the feature of an enormous snow bank or field spanning roughly 400 meters in width. Establishing our site was hard work and we slept that night at 6560m.

The next day, July 24, we entered into the upper cornice section, but due to exposure to avalanche danger and our fatigue we turned around to rest the day out at our bivy site. Our third day of climbing, July 25, at 03:00 we set off, making it through the hazardous mixed section to reach the summit at 19:20. We made our descent and arrived back at our bivy site July 26 at 03:45. The abseil was very dark and we lost our way down. We couldn’t comprehend how things had turned out and luckily wespotted traces of our footprints and were able to follow them back to our bivy site. As soon as we returned to the tent, we cooked a meagre meal.

July 26 09:00. Despite our wasted physical state and lack of gear, we downclimbed and rapped, finally arriving at base camp at 18:40. Our climb lasted four days; three days to the summit in a single push and in alpine style. We experienced much falling rock and avalanche conditions during our climb on the south face. The wall was angled about 70 degrees and was comprised of ice covered by snow, creating a nasty crust on which we had to try and protect ourselves, and this significantly affected us, in particular our physical strength. We left Pakistan for home after having spent roughly two months at Gasherbrum V(7147m).

Climbing Length
Base Camp to Summit = about 2,400m.
Bergschrund to Summit = 1450m
Glacier Approach = about 3.5kilometers