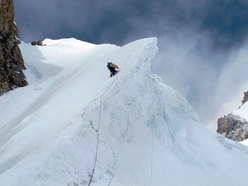 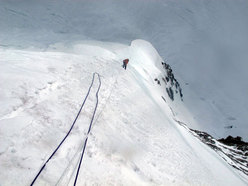 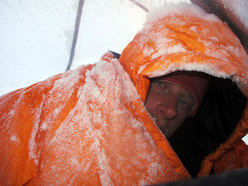 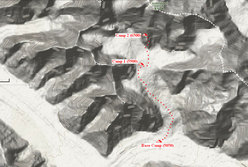 The map of Gasherbrum II and the route so far
Photo by arch. S. Moro, D. Urubko

Gasherbrum II in winter: Campo 2 for Moro, Urubko and Richards

On 25 Janaury 2011 Simone Moro, Denis Urubko and Cory Richards installed Camp 2 at 6500m on Gasherbrum II. In doing so they carried out another important step in their attempt to carry out the first winter ascent of the 13th highest mountain in the world.

Good news from the attempt to make the first winter ascent of Gasherbrum II. After having installed Camp 1 at 5900m, on Tuesday Simone Moro, Denis Urubko and Cory Richards succeeded in establishing Camp 2 at 6500m, in a startling 4 days of "work" and 3 nights spent on the mountain. This is undoubtedly an important step forward for the expedition and it required a considerable effort, due not only to to extreme temperatures (during the night at Camp 2, where the three slept, the thermometer dropped to -46 °C), but also due to the other difficulties... as Simone Moro explained in this fleeting interview via Skype...

What have you been up to so far?
With Dennis and Cory we've spent 3 nights and 4 days working on the mountain. The three nights were really tough due to the temperatures, -41 -43 and -46 the last one... TERRIBLE

Yup, that's pretty cold ;-) But let's start at the beginning, tell us about the "path" that led from Base Camp to Camp 1?
From Base Camp at 5050m to Camp 1 at 5900m it's a real maze. We used 150 flags to mark the route. We fell countless times into terrible crevices... but thanks to the fact that we were roped up we're still here. Denis and I had to rely on our instinct to find a way though the labyrinth. And Cory gave us a hand, too...

A job well done
Yes, what is certain is that the expedition which is about to arrive to attempt G1 will find everything already in place ;-)

And then...
We reached Camp 2 at 6500m and spent the night there. Reaching it was really hard, we climbed via cornices, icy slopes and unstable snow. We didn't have any fixed topes are we ended tying together pieces of old rope on some sections. We didn't have any anchors so we left our ice axes there.

How come you were without ropes and anchors between Camps 1 and 2?
Because G2 is said to be easy... it may be easy in summer with 20 expeditions, warm temperatures and fixed rope everywhere, but in winter it's really serious!! The route is really long and your nerves are always tense... from Camp 1 to Camp 2 we needed 2 days. Jokes to one side though, we had decided on a lightweight style and these decisions can cost dearly...

So, after having slept at Camp 1, you began your ascent to Camp 2...
We waded through waist-deep snow on the plateau and only when we reached G2 did the music begin to change a bit (I mean only a bit). We organised a bivy at 6250m beneath a serac, at the start of the most exposed, airy and vertical section which leads to G2.

And the next morning?
We set off from 6250m and in the late afternoon we had only reached 6500m. Almost an entire day to climb 250 fucking and dangerous meters. We climbed onto the snow and ice arete wedged beneath the rock pinnacle beneath C2. It's very steep, exposed and delicate. With a really knife-edge final crest which made my hair stand on end... here and there we came across bits of buried or frozen rope and with Dennis we worked hard to make them usable, or at least, some sections of them.

So you installed Camp 2 and spent the night there, today you returned to Base Camp... What next?
All that remains is the walk from C2 to the summit...

What do mean by "walk" from Camp 2 to the summit of G2...
From C2 you continue up a 45° shoulder and then via a long traverse (35°) beneath the summit pyramid to reach the summit ridge at 7850m. From here, between one gust of wind and the next, all that is left to do is fight and climb to the summit. This is the "walk" that we've got in store...

How do you think you'll go about the summit push?
Our plan is simple: we'll set off from Base Camp to Camp 1 (and spend the first night here). Then we'll climb from Camp 1 to Camp 2 (second night). From C2 we'll continue up with our tent to establish Camp 3 at 6900m and we'll spend the night there. From Camp 3 we'll set off for the summit.

And when will this happen?
We'll set off when my weather forecaster Karl Gabel says the words: Simone, off you go! I trust him 100%.

How is team morale?
When faced with extreme conditions, Denis and I really are two animals, and here on G2 we're two animals! Cory has understood this completely and adapted perfectly. It's a true battle here in the Karakorum, in winter, and you need to be prepared to do this for up to 3 months if you want to win.

What has surprised you most during this expedition?
We've been here for 16 days and it hardly seems real that the next attempt will be a summit bid. Perhaps we'll fail... but it's great to have everything in place already. What is certain though is that Dennis and I have endured 5 monstrous nights on the mountain and numerous days at ferrying loads...

Explain to us what - 43, - 46 °C means... Is this the lowest you've ever experienced?
Perhaps on Makalu and Shisha (in winter, Editor's note) we had a couple of colder hours (on the summit) but we were moving. -46 °C at night, NEVER. Denis told me he's never felt anything this cold before. He shivered the whole night through...

So... what do you dream about at - 46 °C...
We're always three in a 2/3 man tent. We sleep with our high altitude suits on, stuffed into the sleeping bag. We really look after our feet... because it's easy for them to get frostbite even when inside a sleeping bag. Then in the morning we're ice monsters, in sleeping bags which have frozen stiff. But... let's just say than I'm surprised because I'm managing to sleep, albeit in short stages, but nevertheless I sleep.

Come on Simone ;-) tell me what you desire most at the moment?
The thing I yearn for most is to play with Jonas, my son who's 1 year and 1 month old. And being with my wife Barbara... The second is piloting a helicopter through the mountains or in Nepal, I'm madly hooked!