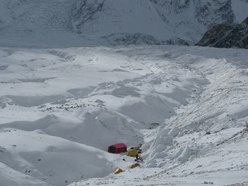 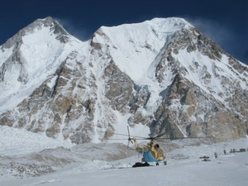 Gasherbrum II in winter: after the summit, Moro, Urubko and Richards reach Camp 1

They're in Camp 1. It was tough but Base Camp is now that bit closer. This, in brief, is what Simone told his wife Barbara via satellite phone just a few minutes ago. It really was an an extremely difficult descent, right through the storm, which Simone Moro, Denis Urubko and Cory Richards had to battle through to descend from 6900m at Camp 3 (where they spent the night after yesterday's historic first winter ascent) to reach Camp 1 at 5900m.

"Now" said Simone "the greatest dangers lie behind us. Tomorrow we'll continue our descent to Base Camp..." The way downwards has been made easier by that "Ariadne's thread" comprised of 200 flags which the three alpinists used to mark the long, contorted and dangerous route past the seracs at the base of the mountain. A true maze which is the final obstacle to reaching Base Camp and the end of this beautiful and intense adventure.

So today Simone Moro, Denis Urubko and Cory Richards have taken another important step forward in this massive undertaking. And what is most important of all is that after 4 days on the mountain (via the summit) they are all in fine form. They are (understandably) tired but need to remain concentrated for one more night and one more day... A night which, according to Simone, will be somewhat more comfortable seeing that the tent at Camp 1 is larger than the one used during the last three nights at Camps 2 and 3. This, with temperatures in winter on Gasherbrum II dropping down to –40 and –50 °C, can make all the difference.