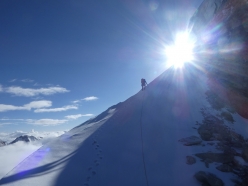 Guy leaving the bivouac col on the second day on the ridge.
Photo by Malcolm Bass 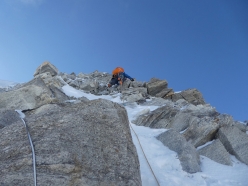 Guy Buckingham on the Grey Tower on the second day on the ridge.
Photo by Malcolm Bass 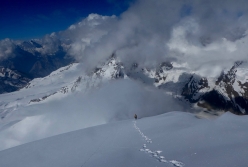 Guy descending the soutt west ridge the morning after the summit.
Photo by Malcolm Bass 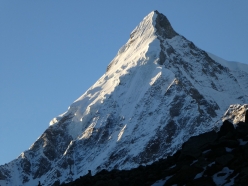 Malcolm Bass and Guy Buckingham have just made the first ascent of the beautiful NW Ridge of Gangstang (6162m) in the Himachal Pradesh Himalaya. They reached the summit on the 9th June and descended to base camp the next day completing a five day round trip.

Gangstang is a classically pyramidal peak which is reminiscent of the Matterhorn. It was first reportedly climbed by Italians in 1945 via the South West Ridge which has since become the normal route. In 2007 Martin Moran and team explored the northern and western aspects of the mountain establishing a partial new route from the west that joined the normal route at 5850m. It was Martin’s photos of and enthusiasm for the unclimbed NW Ridge which inspired the climbers.

After making a tiny impression on the superb granite bouldering surrounding base camp, the team with their Liaison Officer, Parmender Sharma acclimatised with a climb of Neelkantha (5324m), previously know as Thirot Shivling, the rock bastion that stands on the tip of the NW ridge of Gangstang. For those going on expedition to India, it’s worth noting that the Indian Mountaineering Foundation will now hire out bouldering mats to expeditions at a very reasonable rate.

After a couple of day’s rest at the comfortable and well located base camp the climbers headed off towards the ridge packed for a five day adventure. The first night was spent on the glacier under the North Face at around 5000m and in the early hours of the following morning they crossed the bergshrund and climbed a couloir onto the North West Ridge. From then on it was rock and mixed climbing all the way; they torqued and crimped, they jammed and pressed down, with the blissful absence of any objective danger from above. By Himalayan standards the rock quality was good but just needed to be managed with respect.

There were two camps on the ridge itself, one being palatial compared to the other, which was half perched over a cornice with everything and everyone tied off in numerous directions.

The climbing, on blocky granite, was excellent, with brilliant situations; for example on day three, Guy torqued up a short wall and reached onto a slab above to find himself peering through a hole straight down the immensity of the west face overhanging the ridgeline by a good 5 metres. However that was the end of the “fun times”.

As they approached 6000m, it was beginning to snow and the wind significantly strengthened blowing straight up the west face leaving them cold and exposed. The climbing, now mostly on bulletproof grey water ice, became monotonous and arduous. They were tiring, the air was thin and their calves were screaming. The pitches just never ended; then, rather anti-climatically the climbers were on the tiny summit. With visibility low, snow and wind still blowing there was only time for the obligatory selfie and fist-bump prior to using a short break in the clouds to locate the start of the South West ridge to camp as soon as possible. After 100m descent they established their last camp in light dry snow glad of the rest and a chance for something to eat.

It snowed all night and was still snowing in the morning, but by 8am it started to clear and allowed them to see the descent route (following Martin’s 2007 ascent line). Four abseils, a lot of down climbing and some dodgy bum-sliding, (almost not stopping for the bergshrund!) and finally they were away from the dangers of the mountain. All that remained was the 6 hour moraine trudge back to base camp for man-hugs, pakora and screech.

When asked about the climb, Malcolm said “ we were looking for a great Himalayan line to climb and we found it in spades!”.

Malcolm Bass is sponsored by Montane and Lyon Equipment. Guy Buckingham is a director of Infinity Mountain Guides and a member of the Association of Mountaineering Instructors

Both climbers would like to thank their sponsors and supporters without whom such trips would not be possible: Montane, The British Mountaineering Council, The Mount Everest Foundation, The Alpine Club, The Austrian Alpine Club