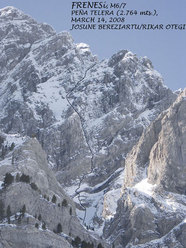 After getting a taste for alpine climbing last year on the Mont Blanc’s Cechinel - Nomine, Josune Bereziartu and Rikar Otegui have now made an interesting first ascent on Peña Telera in the Spanish Pyrenees. On 14 March the two climbed a new line to the right of the extremely popular ‘La Diagonal de Telera’ and, placing just a couple of pitons, nuts and friends the two overcame a small 90º ice fall to reach a series of roofs. These were climbe at M7 and revealed to be the crux, since the route then finished easily to join up with ‘Super Lulu’ which ascends from the opposing face.

The route name Frenesi reflects an extremely lucky near-miss the two had on the second pitch, as Josune explains: "We on-sighted the hardest difficulties, except on the second pitch, M4+, where Rikar had took a Fall Factor 2 directly onto the belay. A crampon slipped and he pulled out the micro cam that protected the first meters below him and suddenly we found ourselves hanging from just one pro, an ice axe belay. The other two pieces of pro, both pitons, were pulled out by the violence of the fall... We immediately repaired the belay and recomposed ourselves. It was a frenetic moment to say the least!"

“Peña Telera” as Bereziartu explains “is one of the most famous winter climbing areas in the Pyrenees. The North Face extends for 10 kilometers, and there are many gullies and routes which make this extremely popular. It is not easy to open new routes as most lines have already been climbed, ours is possibly the hardest in the area.