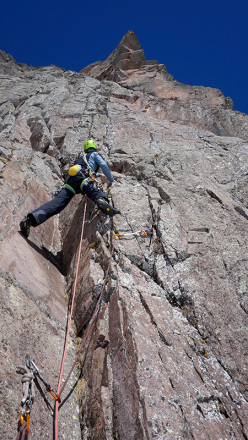 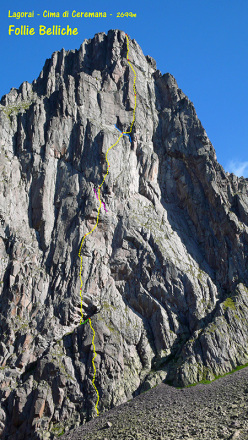 Follie Belliche on Cima Ceremana, a first redpoint in winter, sort of...

On 13 March Rolando Larcher and Luca Giupponi made the first free ascent and first winter ascent of Follie Belliche (330m, 7b+ max, 6c+ obl.), the route they established on 30/08 and 21/09/2013 up Cima Ceremana (Lagorai, Dolomites). The report by Rolando Larcher.

This new route came about due to our curiosity to try our hand at some rock we're not used to - porphyry - but above all thanks to Alessandro Beber who suggested we check out Cima Ceremana in the Lagorai massif. In summer 2011 I went to see the face and was struck by its tranquility, by its beauty and the quality of the rock. Last year the moment came to get something done and together with Gippo (Luca Giupponi Ed.), who is always keen on trying something new, we attempted the climb.

In the beginning we felt as if we'd lost our bearings on this new terrain, but our confidence soon grew and, aided by the generous rock features, we progressed quickly to reach the summit after two days. The first ascent was fun, required some bolts but also plenty of Friends. As usual it needed completing with a free ascent, but the season had come to an end and so we put it off to the next one.

A month ago, while returning exhausted from our Venezuela expedition, Gippo threw it at me: "Why don't we go and redpoint the route while the lifts are still open? The wall faces south, the approach is a lot less tiresome since with skis we can reach the base in just 45 minutes. And the descent will be great fun!" Yes, yes, Luca, good idea, but give me a break for a little while, otherwise this incurable passion will transform into a job...

On our return home we were greeted by metres of snow and bad weather that made us forget about our idea. But all of a sudden the high pressure system arrived and with the sun the ideas gained new momentum. What should we do Gippo, give it a go? OK, but let's wait for the snow pack to settle and for the snow to melt off the face, then we'll set off. I'm free on Thursday, what about you? Yes, I can get time off and the weather should hold. Right, vamos!

While I prepare the gear I consider the fact that, of all the routes I've established, this is the first I'll try to redpoint while still officially in winter. This seems unreal, but it's not excessively difficult and, if the worst comes to the worst, we'll have a nice day out skiing. Even if the rock faces south and it's warm even at altitude, nevertheless I pack everything I need for an "Rusconi" brother experience.

Thursday comes, we set off at dawn more or less, seeing that we have to wait for the lifts to open. Luck has it that at 8:00 we're already skinning up Punta Ces. The ski mountaineering route is short and pleasant, and in 50 minutes we reach the base of the mountain. We discover that it's in perfect condition, not a flake of snow, while there's a bundle at the base, including a Bergschrund. Originally the first pitch was 55m long, today perhaps 40...

It's really warm and we start climbing in T-shirts. We progress totally incredulous, the climbing conditions are perfect and we're surrounded by a sea of snow. It seems impossible that these two elements, so different, can coexist so well. We continue upwards, savouring this unexpected climbing while, opposite us, a group of ski mountaineers enjoys the beautiful Valcigolera summit. We breach the final pitches in total ecstasy and reach the top overjoyed.

It's still early and after two abseils we have a rest, we bask in the sun and observe the world around us. Beautiful!
We descend to the base accompanied by the sun's warmth, it seems as if today the sun doesn't want to set. As the shadows get longer, climbing shoes are swapped for skis and this is the last act of a fantastic day. I've never paid much attention to winter ascents in March, even less so if they're on South facing mountains, and I confirm this belief once again. Having said that, in many years of climbing I've rarely experienced such pleasant moments.

We decided to call the route "Follie Belliche", folly wars, to remember the absurdity of all the past and future wars. In particular, a century after the start of the First World War which marked the start of further madness up in the mountains. Cima Ceremana testifies this, it's a sad battle field, punished by grenades but also by avalanches and the cold. The entire ridge was an Austrian war trench, dug out to halt the Italian advance.

Thanks:
For Rolando Larcher: La Sportiva, Petzl and Montura
For Luca Giupponi: La Sportiva and Mammut