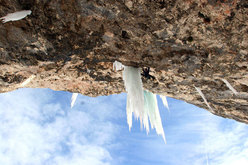 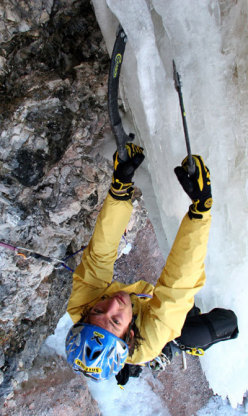 Two days ago the South Tyroleans Florian Riegler and Herbert Klammer made an impressive repeat of Illuminati in Val Lunga (Dolomites), described by Riegler himself as being "one of the hardest mixed multi-pitches in the world."

The ascent is probably the first repeat of the 150m mixed line since its January 2006 first ascent at the hands of the extremely strong Austrian Mountain Guide Albert Leichtfried. The repeat is outstanding not only for its M11+/WI 6+ grade but also because of the sheer beauty of the line and its fragility. Yes, because being on physical form and waiting for just the right moment for a route like this one to come into condition is more than essential.

As usual we'll grow old repeating the obvious: these ice games are great fun and at the same time super delicate. Be careful therefore. Don't take our words for it, take Riegler's...

Illuminati by Florian Riegler
Illuminati is one of the hardest mixed multi-pitches in the world. It's located in a cave which resembles the Grande Grotta in Kalymnos, obviously with ice and located at 2000m above sea level. 90m high, 45m overhanging and decorated with 3 drips, the cave is truly impressive.

The ice pitches (called Mysteria) had been freed in 1998 by two ice climbers from Bolzano, the mixed were freed by Albert Leichtfried in 2006. For what I know, there has not yet been an integral repeat.

After having attempted the first two pitches twice, on 29 January I felt ready to exit up onto the ice, but from below this didn't seem in good condition (temperatures in the sun reached 15°C). But I was on form, I felt good and Herbert agreed to climb with me. I started off well and climbed all the hard pitches straight off. Before moving onto the ice I was extremely nervous, but the ice seemed climbable.

After a three-hour battle to climb the 90m I exited, soaked to the bones but alive and happy. Shivering due to the cold we descended by abseil to "flee" from these drips which, right to the end, failed to convince us. At the end of the day I felt the route to be slightly easier than the grade suggests, but it without a doubt one of the greatest adventures I've ever experienced.

Thanks to Salewa, Grivel, Scarpa