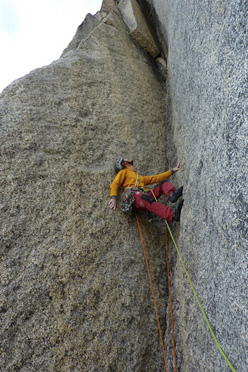 Nico Favresse, his brother Olivier, Sean Villanueva and Ben Ditto are now sailing home after a final flurry up the granite walls of Greenland.

Prior to the final departure the four climbers left their sailing boat on another three occasions to ascend a myriad of other routes. During a first raid the team established two new 450m lines up the Shepton Spire (named after the captain of the boat, Bob) in a 36 hour push, with a cold bivy on the summit and a long descent via the ridge.

A second raid resulted in Never Again!, a 550m line climbed with the 75-year-old captain who exclaimed that, after not having touched rock since 1977, that this would be his last route ever. A third raid, even further south along Greenland's coastline, reaped the final two routes up the Close Call Wall (no prizes as to why the name), the nth bivy and virgin summit, and long return down the ridge in a 38 hour push. It is worth noting that the team has named one of its routes Chloè, in memory of their compatriot Chloè Graftiaux who died at the end of August on the Aiguille Noire de Peuterey (Mont Blanc).

The expedition is now coming to an end. Or rather, in many respects much has still to be done, since the boat is currently in the Atlantic ocean, half-way between Greenland and Europe and fighting an old lady called Daniela. Or rather, the tail-off of an ex hurricane...