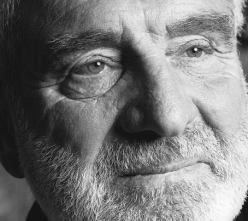 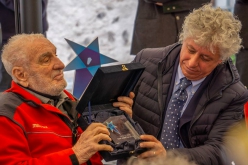 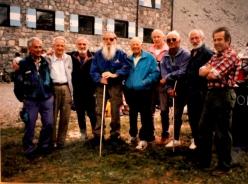 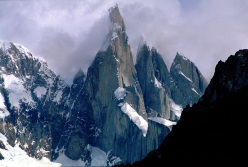 Cesare Maestri passed away yesterday aged 91. The highly talented Italian alpinist, mountain guide and author was nicknamed il Ragno delle Dolomiti, the Spider of the Dolomites. His name will always be intrinsically linked not only to his beloved home mountains, but also to Cerro Torre in Patagonia.

With Cesare Maestri’s death yesterday a piece of mountaineering disappears, as done a bit of our collective history. With his impetuousness and strength, his legendary free climbing prowess and his desire to do battle and go “against the grain", Maestri succeeded in winning over generations. Especially those youngsters who, in the 1970s and '80s, with their calls for liberty and free climbing, upset and challenged the mountaineering establishment.

Maestri was never someone one who supinely followed the rest of crowd. Born in Trento in 1929, it was probably from his father Toni, an actor and then employee, that Cesare inherited some of the histrionic behaviour that distinguished him, as well as the need to fight for his own personal freedom. It is no coincidence that young Maestri took part in the partisan struggle, in Italy’s resistance movement during World War II. After the war he became a rock climber and mountaineer and embarked on the adventure that would soon change and profoundly mark his life.

Maestri started climbing in the Dolomites, his backyard mountains, and immediately distinguished himself for his ability at free climbing the area’s most difficult routes. Maestri took things one stage further still and specialised in daring solo climbs. His ability had become proverbial (not only climbing up but also down; he became the first to downclimb, solo, a grade VI route). But this didn’t suffice to allow him to become a mountain guide. Legend has it that to when he failed the exam he surprised everyone, in true Maestri style, by soloing down the Guides route on Crozzon del Brenta. When he was in clear sight of the mountain guides, he dropped his rope into the void and continued his descent without any protection whatsoever.

This was Maestri. Somewhat contrarian, some would argue. So much so that at one point he, such a strong and talented free climber, turned his attention to aid climbing, to following the imaginary direttissima line a drop of falling water would take. Then, in 1952, he too became a Mountain Guide and he continued to climb incessantly, racking up a huge list of first ascents and class repeats.

The turning point, the decisive moment that would shape his destiny, came when he received a letter from Cesarino Fava, a mountaineer from Trentino who had emigrated to Argentina and which Maestri had not met previously. Fava invited Maestri to climb the impossible Cerro Torre in Patagonia, and this proved an offer that Maestri could not resist. Maestri had first laid eyes on the mountain the previous year with the Trentino expedition led by Bruno Detassis. And he had suffered from Detassis' order to not even be considered for the climb.

So this is how Cesare Maestri set off in 1959 for Patagonia with Toni Egger, a talented Austrian mountaineer and ice climber, to attempt what would become known as the "Scream of stone". Cesarino Fava joined them and the adventure began. Maestri certainly could not have remotely foreseen it, but that expedition marked his entire life, for better and for worse. It ended with Cesarino Fava who stumbled across the near-death Maestri at the base of Cerro Torre. Maestri stated he and Egger had reached the summit but that, during the descent, his climbing partner had been swept away by an avalanche while he had made a desperate, solitary climb for survival. There was no trace of Egger, and it was the Austrian alpinist who had the camera and the photos that could prove the summit.

As is sometimes the case in mountaineering, a great first ascent went hand in hand with a great tragedy. The ordeal left its mark on Maestri. It was not easy for him to return to normal. Also because after a few years, following the failed attempts at repeating the Maestri-Egger route, some began to question the ascent. In particular in the Anglo-Saxon mountaineering world.

Of course, Maestri did not take this well. How could he have? It was these doubts that led to his second expedition to Cerro Torre. In 1970 he, with Ezio Alimonta, Daniele Angeli, Claudio Baldessarri, Carlo Claus and Pietro Vidi established a new route up the SE Ridge of Cerro Torre. Naturally, Maestri did it his way, hauling a heavy compressor up the wall with which he drilled the holes of his pressure bolts. Unsurprisingly, the climb was nicknamed the Compressor Route. And for decades it was by far the most repeated line on Cerro Torre, but also the most criticised, precisely for the use of those bolts.

Furthermore, controversy and disbelief surrounding the 1959 first ascent continued to mount. And never stopped. In many respects it became a curse, a torment even, that Cesare Maestri confronted with great strength, almost like a warrior. Many believed him him. Others absolutely did not. The 1959 ascent has been relegated as "contested". What remains is the fact that there is no objective, conclusive evidence for or against. It would be nice to think that the word of an alpinist, until proven otherwise, should be accepted as the truth

In the end what remains is that Cesare Maestri was a great climber, a man who fought for his ideas and who certainly suffered a great deal. We would like to remember him for how he managed to inspire an entire generation of mountaineers. And we would like to remember him as a man with all his greatnesses and also his weaknesses. And we would like many to read Two Thousand Meters of our life, the beautiful book he wrote together with his beloved wife Fernanda. It goes without saying that those two thousand meters are on Cerro Torre. Those of his destiny.

23.04.2008
Ciao, Cesarino Fava
Cesarino Fava died yesterday aged 87 at Malé (Italy). His life was bonded to mountaineering and in particular to Cerro Torre in Patagonia. All mountaineers have lost a great friend.