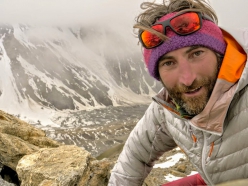 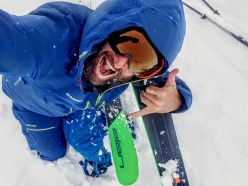 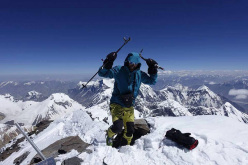 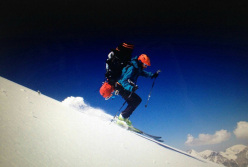 Carlo Alberto Cimenti, best known as Cala, and Patrick Negro perished yesterday in an avalanche while skiing in the mountains of Susa Valley in Italy.

Yesterday afternoon Carlo Alberto Cala Cimenti and Patrick Negro lost their lives while ski mountaineering in the mountains of the Upper Susa Valley in Piedmont, Italy. The two highly experienced mountaineers and skiers were buried in an avalanche in their backyard mountains, above Pragelato, in the Chisone Valley.

Unfortunately we know little about Patrick Negro, apart from the fact that he was 50 years old, had two children and was a former leader of the Pragelato Mountain Rescue squad. This is more than enough to comprehend what a great person he was.

Cala Cimenti was one of Italy’s best known mountaineers and extreme skiers. Aged 45, his first love was climbing the mountains and then following this up by skiing down them, an art he excelled in. After climbing Cho Oyu in 2005 and Ama Dablam solo in 26 hours in 2010, in 2011 he became the first Italian to ski from the summit of Manaslu (8163m).

In 2015 Cala became the first ever to ski from the summit of Communism Peak (7495m) in the former Soviet Union. With this ascent and descent he completed the collection of the five mountains higher than 7,000 meters in the former Soviet Union (Pik Lenin, Pik Khan Tengri, Pik Korjenekaya, Pik Pobeda, Pik Communism), and for this feat he received the prestigious 'Snow Leopard' award from the Russian Mountaineering Federation.

In 2017 Cala summited Dhaulagiri (8167m) and despite poor conditions managed to ski to Base Camp from Camp 2 at 7000m. In 2018 he teamed up with Matthias Koenig from Switzerland and made the second integral ski descent of one of the most beautiful mountains in the world, Laila Peak (6096m) in the Karakoram, which had been skied for the first time from the summit only a few days earlier by France's Carole Chambaret, Tiphaine Duperier and Boris Langenstein. A few days laterCala and Koening also made the first ski descent of the nearby peak, calling it Laila's little sister.

Pakistan was undoubtedly an important source of inspiration for Cala. In 2019 he returned to the Karakorum once again to climb one of the most coveted and fearsome mountains of all, Nanga Parbat. In keeping with his style he wished not only to climb it woithout supplementary oxygen, but also to descend on skis, a feat he managed with Vitaly Lazo from Russia from just below the top. A few days later Cala, while skiing from the summit of Gasherbrum VII, played a fundamental role in rescuing his climbing partner Francesco Cassardo who had fallen and injured himself during the descent.

At the summit of Nanga in 2019 Cala dedicated these words to his wife Erika Siffredi "I am lying on top of the world and am crying and laughing and I love you." After skiing off Manaslu with Marco Galliano, who snowboarded down the mountain, Carlo Alberto told planetmountain.com "I assure you that skiing while touching the sky is something indescribable." On Sunday he would have turned 46.