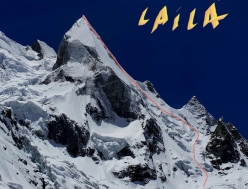 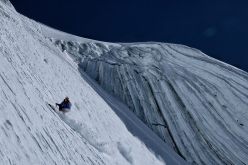 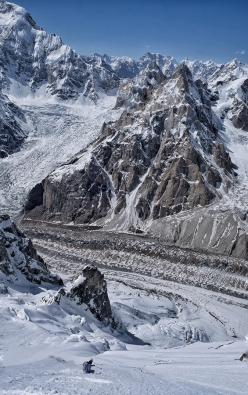 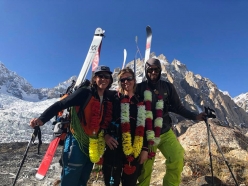 French skiers Carole Chambaret, Tiphaine Duperier and Boris Langenstein have made the coveted first ski descent from the summit of Laila Peak (6096m) in the Karakorum, Pakistan. A few days later Italy’s Cala Cimenti and Switzerland’s Matthias Koenig made the second descent of the stunning NW Face from the summit.

French skiers Carole Chambaret, Tiphaine Duperier and Boris Langenstein have caused quite a stir with what is being hailed as the first integral ski descent of the stunning Laila Peak. Located between Chogolisa and Masherbrum in Pakistan’s Karakorum, this peak is recognised as one of the most beautiful mountains in the world with a 1500m, 50° NW Face that is certainly one of the most coveted ski descents of all.

The remarkable needle has a somewhat chequered history: first ascended, unofficially, in 1987 by the British mountaineers Andy Cave, Tom Curtis, Sean Smith and Simon Yates via the West Face, it was subsequently climbed in the early 90’s by a German expedition and by a Swiss expedition in 1993. The first official ascent was carried out in 1996 by an Italian expedition led by Oreste Forno: on 2 July Paolo Cavagnetto and Fabio Iacchini summited via the northwest ridge, while Camillo Della Vedova, Giovanni Ongaro and Guido Ruggeri followed in the footsteps the next day.

In summer 2005 Fredrik Ericsson and Jörgen Aamot launched an impressive attempt to ski the mountain and although the Scandinavians climbed to within a few hundred meters of the summit, they were thwarted from reaching the top by prohibitive conditions and then proceeded to ski down the North-West face. All successive attempts at skiing the face fro the summit failed due to fickle conditions, including that of the 2012 international expedition comprised of Luca Pandolfi, Brendan O’Sullivan, Paul Holding, Edward Blanchard Wrigglesworth. In 2016 a fateful Italian expedition ended in tragedy when 27-year-old Leonardo Comelli perished while attempting to ski the mountain together with his climbing partners Carlo Cosi, Zeno Cecon and Enrico Mosetti.

Skiing Laila Peak had been on the agenda of Chambaret, Duperier and Langenstein for a number of years; based in Val d’ Isère, 32-year-old Chambaret works as a ski instructor, 30-year old Duperier works as a ski patroller and is an aspirant mountain guide, while 33-year-old Langenstein works as a mountain guide. In April they travelled to the Hushe Valley and established Base Camp on the Gondogoro Glacier. After having scoped a possible return via the North Face and after having ascended up to 5300 meters on three separate occasions, on the first day of good weather they set off at 1 am from Base Camp.

Chambaret described the 11 May ascent as "A little more than 2000 M of ascent in a grandiose and varied setting, between slope and snow corridor, mixed climbing and ice, South and north exposure." After climbing continuously for 12 hours they summited in perfect conditions "Beautiful weather, no wind, a great moment of happiness at the top, then an incredible 1800 m downhill in a powder snow!!!" As simple as that. Writing to planetmountain.com after the first ski descent, Chambaret stated "the beauty of this pyramid is quite simply incredible."

Making the most of what are evidently unusually good conditions, on 25 May Italy’s Cala Cimenti and Switzerland’s Matthias Koenig and Julian Dänzer also successfully summited the mountain. While Cimenti and Koenig managed to pull off the second ski descent, unfortunately Dänzer dropped his ski at the summit and was forced to downclimb. After a day of rest Cimenti and Koenig returned to the mountain to remove their tent from Camp 1 at 5100m but decided to push on and, after spending the night at 5700m on the obvious col, ascended and skied the mountain immediately next to Laila Peak. This appears to be unnamed and has now been dubbed Laila's little sister.