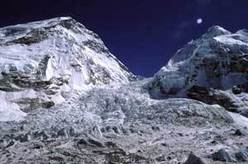 This spring a team of Sherpas will attempt to beat the Everest speed record and the total number of individual ascents. The group, led by 16 times summiter Apa Sherpa and speed record holder Lhakpa Gelu Sherpa, aims to promoted the Sherpa culture and raise funds for Sherpa children.

Last Thursday a record breaking expedition set off for for Everest. We're talking about the Super Sherpas Expedition, comprised of 6 extremely experienced superb Sherpa mountaineers who are heading to Chomolungma not only to reach its summit but to beat two existing records: the speed record and the number of individual ascents.

Although nothing can be taken for granted, achieving their aim shouldn't prove too far beyond their reach: together the members tally 52 Everest summits and the expedition is led by two exceptional mountaineers: Apa Sherpa holds the individual record with 16 summits, while Lhakpa Gelu Sherpa, with 14 summits under his belt, holds the speed record with an incredibile 10 hours 56 minutes 46 seconds.

"This is my 17th time on Everest... I hope it will also be my 17th summit" is what Apa Sherpa stated prior to departure. The expedition's "mission" is to demonstrate the exceptional value of the Sherpa people, publicise the beauty of Nepal, and shed light on the Sherpa culture and its immense contribution to high altitude mountaineering. Furthermore the project aims to film a documentary of the ascent and all funds will be made available to the Sherpa children who live in the Himalayan foothills.

All mountaineers know how special the Sherpa population is and how much they have contributed to the history of the highest mountains in the world. It was no chance that the first ascent of Everest was carried out by Sir Edmund Hillary and Sherpa Tenzing Norgay... and perhaps this wasn't publicised as much as it should have been. The Super Sherpa