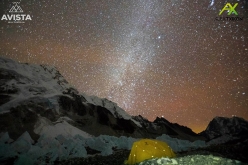 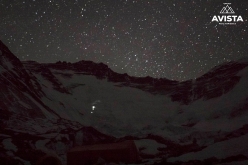 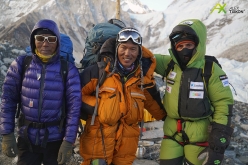 Ready for the summit bid: the Spanish expedition led by Alex Txikon attempting to climb Everest in winter without supplementary oxygen
Photo by archive Alex Txikon

The Spanish expedition led by Basque mountaineer Alex Txikon to climb Everest in winter and without supplementary oxygen has begun in earnest. A weather window is forecast for 14 to 18 February 2017.

The long-awaited moment has finally arrived: the Spanish expedition led by Alex Txikon that aims to ascend Mount Everest in winter and without O2 has started its decisive summit push. The 35 year-old Basque mountaineer, along with 28-year old Carlos Rubio, had reached base camp of the highest mountain in the world on January 5 with the aim of reaching the 8850m summit without supplementary oxygen in the coldest of seasons. So far this feat has only been achieved by one other person, namely Ang Rita Sherpa who reached the top on December 22, 1987 at 15:20 (winter officially began at 4:45 that same day). It has to said that even with supplementary oxygen the task in hand is huge, so much so that for the last 25 years Everest has never been climbed in winter. The first winter ascent of Everest, carried out on February 17, 1980 by Krzysztof Wielicki and Leszek Cichy from Poland, made history and simultaneously paved the way for a new era of Himalayan mountaineering, since it was the first ever 8000er to be climbed in the winter.

Back to present day; right from the outset Txikon and his expedition composed of nine Sherpa were forced to battle not only against the extreme cold, but also against a series of adversities and setbacks. The mountaineers immediately dealt with the infamous Icefall, finding their way through the maze of seracs and crevasses and fixed ropes to establish Camp 1 at 6050m on 16 January. A day later the expedition was struck by tragedy: the liaison officer Padam Jung Rai developed altitude sickness and, although rapidly transported to lower altitudes, he perished. Despite this terrible blow the team resumed the ascent and on 19 January the climbers set off once again to establish Camp 2 at 6390m circa. A few days later Carlos Rubio developed pneumonia and was flown by helicopter to Kathmandu, while the expedition returned to the base camp to recharge its batteries before the 1000m leap from Camp 2 to Camp 3, at 7350m. Last week the Basque mountaineer, along with five Sherpa, reached the South Col where they deposited 15 kilos of equipment in order to establish Camp 4 at 7950m and acclimatise by spending a night in the "death zone", but due to an incoming storm all climbers retreated to BC.

The mountaineers are now back on the mountain, committed to what may turn out to be the decisive summit bid. A good weather window has been forecast for 14 - 18 February and according to their GPS tracker, a first group has now reached Camp 2. Txikon is accompanied by Aitor Barez and Pablo Magister, and six Sherpa: Norbu, Nuri, Chhepal, Furba, Lakpa and Pemba. Norbu has climbed to the top of Everest seven times previously, Nuri three, while Txikon carried out the historic first winter ascent of Nanga Parbat in February 2016 together with Simone Moro and Ali Sadpara, while their climbing partner Tamara Lunger stopped a few meters lower down.

Climbing Everest in winter is a gigantic challenge, full of unknowns. Shortly before setting off Txikon tweeted: "I need you here with me more than ever!" We’ll all keep our fingers crossed!