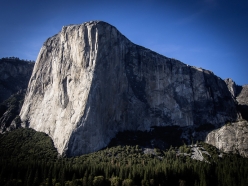 El Capitan, Yosemite. Enormous rockfall detached at around 13:55 on 27/09/2017 from the extreme righthand side of the face
Photo by Frank Kretschmann / www.funst.de 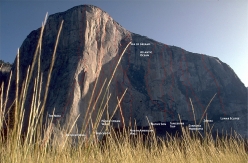 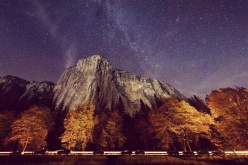 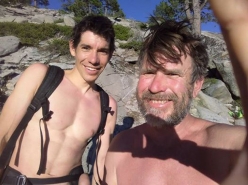 Alex Honnold and Peter Zabrok on the summit of El Capitan, Yosemite, after the first repeat of Adrift carried out by Zabrok and Sean Warren (05-06/2017)
Photo by Peter Zabrok, Sean Warren

Rockfall on El Capitan in Yosemite, USA, that took place shortly before 14:00 on 27/09/2017 has killed one person and injured another according to park officials.

Huge rockfall on El Capitan has killed one person and injured another, according to Yosemite National Park officials. At present the name of the victim has not been released, and it is unknown whether the victim is a climber or a tourist. The rockfall occurred on Wednesday afternoon just before 2.00 pm on the east side of the granite monolith, directly above the Waterfall Route and therefore close to the waterfall Horsetail Fall. The rockfall is estimated to be at least the size of an appartment. After the fist fall a series of smaller falls ocurred, at least three, and currently the Rangers are on scene assessing the situation. In 2010 rockfall occurred on the same portion of the wall, fortunately without injuring anyone.

He posted the following on Facebook immediately after the accident "A 100 foot by 100 foot piece of El Cap just fell off directly above WaterFall Route. We are past it and we are safe. Had we been underneath it we would have died for sure. Unfortunately I believe they were two or three people at the base who may have been hit. My sincere condolences to all and I pray for the safety of those on the ground.. But we are safe. I give thanks to God and my Saviour Jesus Christ.
A first responder was just helicoptered in. There have been three subsequent enormous rock falls and this rescuer is in tremendous peril.
I just happened to be tagging up some gear at the precise moment the rock fell. It was as big as an apartment building."

Yosemite and in particular El Capitan is currently gearing up for the autumn climbing season and hundreds of climbers from all over the world are expected to reach the valley shortly.

Large rockfall off the East Buttress of El Cap in Yosemite. I heard and saw it from Glacier Point at 1:51-1:52pm pic.twitter.com/youAujh3pA

17.06.2017
A Bird's Eye View of Yosemite Valley
The video clip filmed by Luis Manzaneda with his drone of El Capitan, Half Dome and the Yosemite Valley, USA.