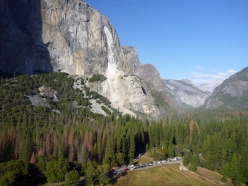 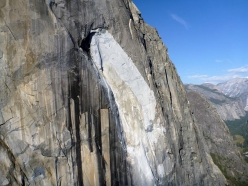 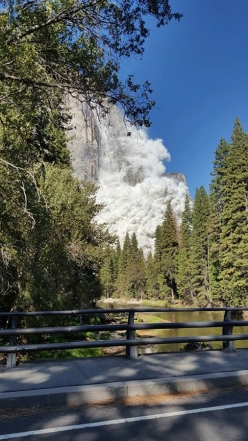 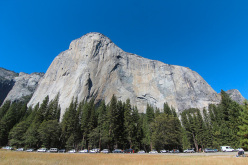 After the first rockfall on on Wednesday 27/09/2017, yesterday Thursday 28 September a second, larger rockfall occurred on El Capitan in Yosemite Valley (USA).

El Capitan continues to shake and shudder. After the first rockfall on Wednesday - geologists actually registered seven different rockfalls over a four-hour time span - yesterday (Thursday 28 September) new rockfall took place on the SE face close to the Horsetail Fall. This time the rockfall was far larger. One person was injured.

The Park Rangers estimate the cumulative volume of all seven rockfalls to be about 16,000 cubic feet (450 cubic meters), equivalent to about 1,300 tons of granite falling down into the valley from a height of circa 200 meters. The Rangers have also named Wednesday’s victim as Andrew Foster, a 32-year-old climber from Wales. His wife, injured in the rockfall, is currently recovering in hospital.

The Yosemite National Park posted the following on its Facebook page yesterday: "Another, larger rockfall occurred on El Capitan today at 3:21 pm. One person was injured. Debris from today's rockfall reached the road. Northside Drive is closed from Camp 4 to El Capitan Crossover, with a detour available on Southside Drive, which is now set up for two-way traffic. Please drive with caution. Rockfalls are a common occurrence in Yosemite Valley and the park records about 80 rockfalls per year, though many more rockfalls go unreported. The rockfall from El Capitan was similar in size and extent compared with other rockfalls throughout the park, though it is not typical that that there were victims."

28.09.2017
Enormous El Capitan rockfall leaves one dead and one injured in Yosemite
Rockfall on El Capitan in Yosemite, USA, that took place shortly before 14:00 on 27/09/2017 has killed one person and injured another according to park officials.