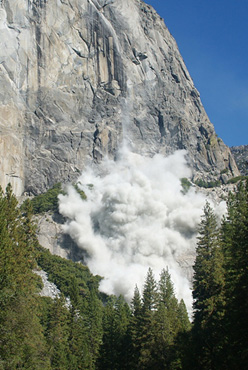 The cloud of dust caused by the rockfall on El Capitan in Yosemite, USA on 12/10/2010
Photo by Tom Evans

Rockfall on El Capitan in Yosemite

The autumn big wall season is in full swing in Yosemite at the moment but thankfully disaster was miraculously avoided yesterday as no one was injured during a massive rock fall which tore down close to the Waterfall route extreme right-hand side of the Southeast Face of El Capitan.

Tom Evans witnessed the fall and wrote as follows: "A small rock fall preceded the “big one” by a few minutes and we all yelled and hooted at the teams on the face near the avalanche. A few minutes later the “big one” ripped off with a sharp cracking sound followed by a thunderous roar. The face was soon obscured by rock dust. A short time later the authorities arrived to see what was up and if anyone had been in the falls path. Fortunately, from what we could tell, there as no one in the direct path of the avalanche. There was a team pushing on Bad to the Bone and another on Bad Seed and Regan is on Surgeon General, which was a long way from the fall. Anyone walking over to the East Buttress, along the base, would have been pulverized… so a word to the wise….. STAY AWAY FROM THIS AREA, as there are huge loose blocks, ready to release at a feathers touch.

For a full report about the avalanche as well as traffic jams on the Salathe Headwall and progress about Tommy Caldwell and Kevin Jorgeson on their Mescalito project, check out the full report on www.elcapreport.com