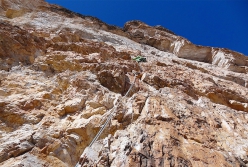 Climbing Via Costantini - Apollonio up the Pilastro della Tofana di Rozes in the Dolomites. First ascended by Ettore Costantini and Renato Apollonio on 13 July 1944, this is surely the most famous and popular route on the pillar thanks to its intrinsic beauty and perfect line.
Photo by Manrico Dell'Agnola 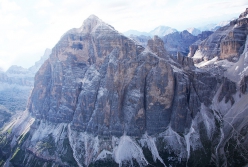 Tofana di Rozes in the Dolomites
Photo by Manrico Dell'Agnola 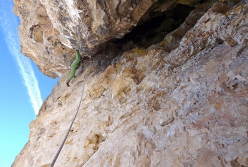 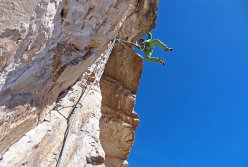 Dolomites Tofana di Rozes and the classic Via Costantini - Apollonio. By Manrico Dell'Agnola

Manrico Dell'Agnola remembers a repeat of Via Costantini - Apollonio up the Tofana di Rozes Pillar in the Dolomites, first ascended by Ettore Costantini and Renato Apollonio on 13 July 1944.

It was late September 1980, and I had a big headache. The day was perfect and the pillar shone in the early morning light. The clean air made it seem close, crisp, inviting. My old gray Beetle somehow made it to where the wheels couldn’t go any farther, and that’s where it remained. Mauro seemed to be in good shape, but I left part of the previous evening’s dinner on the ledge of the attack. The adventure begins.

Less than a year ago we didn’t know what climbing meant, and now we were there. We touched grade 6 holds, and above us yellow overhangs . . . a dream. I climbed quickly, and the bulging biceps of Mauro, who followed me, seemed to indicate trust. Everything went smoothly until we were below the "Mule’s Back", and we were proud of that, but we were much less proud the day after, when we descended to Rifugio Giussani cold and humiliated to beg for a bowl of soup.

The mountain had once again taught us something, and I will always remember the night in a T-shirt on that freezing ledge. Now, though the pillar is still challenging, we free climb it in a few hours, and sometimes we descend from the second ledge if the Mule’s Back is wet, or even climb only the gray part on a warm August evening. The Via Costantini - Apollonio has not changed, though; in fact, there were once more pegs. We are the ones who have changed.


VCHECK OUT THE TOPO OF VIA COSTANTINI - APOLLONIO by MANRICO DELL'AGNOLA on www.karpos-outdoor.com 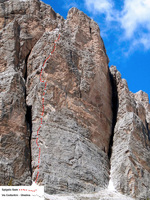