► News ► Alpinism ► No Credit, new rock climb up Tofana di Rozes in the Dolomites by Gietl and Tavanini
Versione italiana 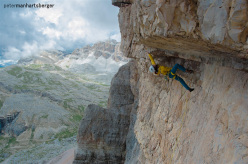 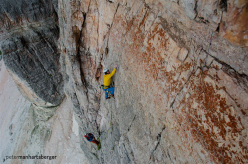 PORTFOLIO / gallery Portfolio: No Credit, new rock climb up Tofana di Rozes in the Dolomites by Gietl and Tavanini

No Credit, new rock climb up Tofana di Rozes in the Dolomites by Gietl and Tavanini

This summer the mountain guides Simon Gietl and Daniel Tavanini made the first ascent of No Credit (X-, 320m), a new route up Tofana di Rozes in the Dolomites.

Eight years after the first ascent of Fein, Herb und Würzig on Castelletto, this summer Simon Gietl returned to the Tofana in the Dolomites massif to add a new route to this group. This time though not with his brother Manuel, but with Daniel Tavanini; at the start of July the duo explored a line up the SW Face of Tofana di Rozes, circa 50m to the right of the start of Via Ferrata Giovanni Lipella below a section marked by rockfall.

"Since the rock didn't seem very compact, and since a path passes directly beneath this section, we talked at length about whether our plan wasn't perhaps too dangerous seeing that people would constantly be walking below us" explained Gietl, adding "Then on the day we planned to climb, the weather wasn't good for walking - and to tell the truth not great for climbing either - which meant there wasn't a soul in sight. Our adventure could begin."

The two mountain guides forged the first four and a half pitches that day, up to the large roof, then returned two days later. With the help of cliff hooks Gietl managed to breach the roof, hammer a small wire into a slender crack and then establish the fifth belay. From here the two continued up to join, on their 13th pitch, the little-climbedVia Mirka. The two decided to end their new line at the intersection with Steinkötter's route and abseiled back down to the ground.

At this point all that was missing was the first free ascent. Before attempting this, Gietl returned twice with Andrea Oberbacher and Djego Zanesco to clean the route and try the moves. Then, with Tavanini once again, Gietl made the first free ascent of No Credit suggesting difficulties somewhere in the region of 10- max.