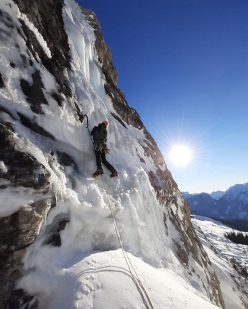 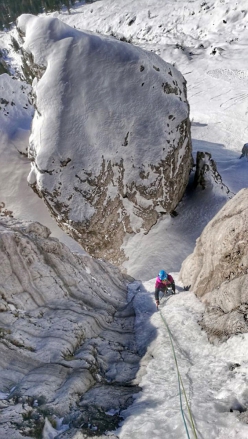 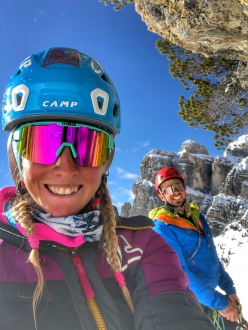 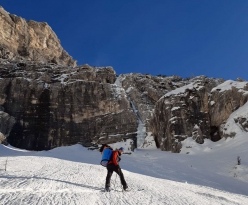 Climbed on 16 January 2021 by Gianni Del Din and Otello De Toni, the icefall Cascata Toboga at Pala delle Masenade in Moiazza (Dolomites) is the winter version of the summer rock climb first ascended in 1989 by Giuliano De Marchi and Anna Sommavilla. Del Din reports while the topo is provided by Giorgia Felicetti and Federico Dell’Antone.

On 16 January 2021 Gianni Del Din and Otello De Toni made the first winter ascent of Via Toboga, established at Pala delle Masenade (Dolomites) in 1989 by Giuliano De Marchi and Anna Sommavilla. Below is the report by Gianni Del Din and the route description by Giorgia Felicetti and Federico Dell’Antone who a few days later made the first repeat of this "beautiful icefall in Moiazza, with a great approach on skis!"

This route on Scalet delle Masenade always caught my attention: it climbs up black walls and gullies, worn smooth by seeping water, close to the more modern and famous climb Il Bombo. Via Toboga dates back to 1989 and was established by De Marchi and Sommavilla. I’d previously climbed it in summer and enjoyed the experience; maybe it wouldn’t become a super classic, but I appreciated its "wild" spirit, and the fact that it always remains a little hidden from view and, more often than not, is damp.

I got the idea of climbing it in winter from Michele Costantini (a mountaineer from Agordo with whom I shared beautiful climbs in the early 2000s). You can see the line after Malga Framont as you head towards Forcella del Camp and, since it faces south, in remains in condition for a short while only. Furthermore, the approach is fairly long, regardless of whether you start from Don di Agordo or from Passo Duran.

After courting the line for many years, on the 16th of January Otello and I seized the right moment to climb it. Doing so with a great climbing partner was extremely gratifying. Also because we were lucky enough to climb it on a beautiful day, in absolutely perfect conditions.