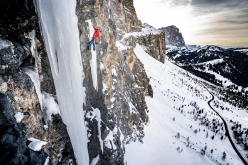 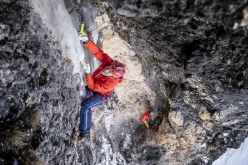 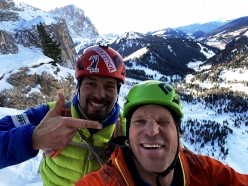 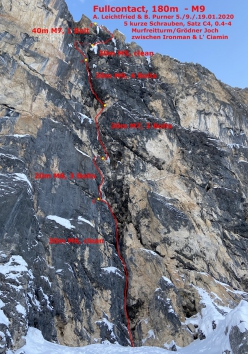 Austrian mountain guide Albert Leichtfried reports about his first ascent, with Benedikt Purner, of the mixed climb up the Murfrëitturm tower in the Sella group of the Dolomites.

The ice climbing season here at home in Austria’s North Tyrol has been rather unsatisfactory so far. We had no choice therefore other than to hop into the car and join in on the cold fun further south. In the Dolomites for instance drips have formed that in past winters never came into condition. And even if the journey from Ötztal to Gröden is long and the alarm clock has to ring extremely early, a trip to the Dolomites is always worthwhile, not least because of the beautiful views which quickly make us forget the long drive.

On 30 December 2019 we’d noticed a line while on a recce around the Gardena pass, but it wasn’t to be; Benedikt Purner had a really bad headache and this dashed all hopes of trying the route. This wasn’t a problem though as two teams were already on Iron Man anyways. We returned home and made plans for our next visit.

On 5 January we got up an hour earlier and were successful - we were the first on the route. We quickly repeated Iron Man and were extremely excited to try the virgin terrain we’d planned on inspecting afterwards. We dashed across to the start, about 100 meters away; our plan was to climb a few meters before deciding whether to look at the entire wall - it was clear from below that this would require a lot of hard work…

After the first few meters Benni was already wedged deep in the chimney and as he furrowed his way upwards without much gear the thought crossed his mind: full contact! After a few ice smears and delicate mixed sections he established a belay. Completely stuck in the chimney with my backpack a smile spread across my face, while the bizarre ice immediately above made me beam. "Pretty cool actually, isn't it?" I said to Benni. "Yes, let's continue on up."

It was already late in the afternoon when we established the second pitch, a tough M8. Right from the outset we’d planned on bolting the belays and climb the pitches with as much trad gear as possible, however the compact rock didn’t allow us to place much pro on the crux. So after the second pitch we called it a day and abseiled off.

We returned with recharged batteries on 9 January. First ascending a route from below is often more tiring than free climbing - on that day we climbed until late afternoon, establishing other four pitches. And although we chose the path of least resistance, this often provided some serious difficulties through steep terrain. What made our ice climbing hearts beat faster was the fact that many sections could be done on small, bizarre ice smears which at first glance were hidden from view, resulting in an unexpectedly high percentage of ice. The route remained adventurous; with just 11 bolts on the 6 pitches, all the rest needs protecting.

We both work as instructors for the Austrian mountain guide training course and had a day off between the ice climbing course and the entrance exam. And what does an ice climber do on a day off? Ice climbing, of course... no sooner said than done and we quickly made the journey from Matrei in East Tyrol to the Gardena Pass and tried to free our project.

When we got to the pass the temps had dropped to -12°C, not exactly ideal for the steep mixed terrain. But after having driven for 2.5 hours it was obvious that we had to give it a go. On pitch 2, the tough M8, I realised how much the biting cold would make things even more challenging. We’d have to climb smoothly and precisely, otherwise we’d get exhausted immediately. But we only knew a few sections from the first ascent, we hadn’t learned the moves. Benni quickly freed the 3rd pitch, now it was time for the crux, an overhanging corner with some icy smears and some long moves. I climbed surprisingly smoothly up to the crux, but then I didn't know the moves and the placements, because while establishing this pitch I’d aided my way past this section. After searching around a bit for some small hooks, I finally found a solution. My forearms were completely pumped, but I still had to keep on climbing a place an ice screw. Luckily I remembered that the back of the corner was behind me and, stemming completely against it, I made full contact! That way I managed to rest my arms a bit, drive in the screw and climb the steep ice to the belay. After an easier pitch, an obligatory section of M7 point awaits before reaching the last drip. I climbed determinedly and reached the top, Bernie soon joined me with a smile on his face. In the bag, despite the cold!

Full contact is special, at first glance the route doesn’t look as particularly fun as it is to climb. The crux is particularly fine, exclusively on ice and somewhere in the region of M9, it’s pretty unique!

Additional info: Benedikt Purner injured himself shortly before the photo shoot while bouldering. All pictures are therefore only of Albert Leichtfried on the route.

31.12.2008
Drytooling, past and present by Albert Leichtfried
Albert Leichtfried, one of the best ice climbers of his generation, examines the state of drytooling in Austria and reports about his new route 'Encore' M13 at the Dryland above Innsbruck
07.02.2006
Leichtfried blazes Illuminati M11+/WI 6+
On 24 January Albert Leichtfried made the first ascent of "Illuminati", a 5 pitch mixed outing located in Val Lunga, close to Selva Gardena (South Tyrol) N. Italy . The 30 year old Austrian has put forward the impressive grade M11+/WI 6+.