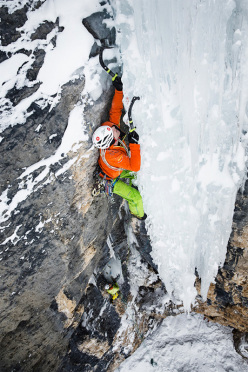 Zweite Geige, new ice climb in the Dolomites by Leichtfried and Purner

Vallunga, high up in the Italian Dolomites, has been enriched with another new ice climb put up by the Austrians Albert Leichtfried and Bendikt Purner. Ever since Leichtfried made the first ascent of Illuminati in 2006 the duo has been highly active in this area and this time last year they established Hyperventilatione and Senza Piombo and added a difficult one-pitch variation to the icefall Sdrucciolo dei Camosci (Palma Baldo, Giovanni Groaz 1991). The latest creation, which dates back to 28 January, promises to be another little gem.

Zweite Geige - the second violin - tackles a line immediately to the right of the famous Crollo dell'Est, first climbed in 1992 by Giovanni Groaz and Renzo Lunzi (and erroneously called Flauto Magico / Zauberflöte in many guidebooks). It was while repeating this "magic flute" in January that the Austrians noticed the potential for a further line to the right. The two mountain guides returned on the 28th together with friend and photographer Elias Holzknecht and, after having climbed Crollo dell'Est to fix ropes for the photographs, they then concentrated on their new line.

Purner led the first pitch, 20 tricky meters up steep mixed terrain past a corner and M7 difficulties protected with a series of nuts and cams, to reach a thick drip where he established the first belay with two long ice screws. Leichtfried then took over on pitch 2, a demanding 40m WI7 outing through wild overhanging ice drips. "It's not often that I've climbed such steep, pure ice" Leichtfried told Planetmountain "this pitch overhangs a couple of metres and it's very rare that something like this forms." Purner then forged the third 50m pitch past a thin smear, while the fourth shares the final 30m freestanding drip of Crollo dell'Est. All pitches were climbed onsight and without the use of any bolts or pegs whatsoever.

Zweite Geige checks in with difficulties up to WI7 M7 and Leichtfried told Planetmountain "This route is certainly one of my personal highlights. Although it's technically less difficult as Senza Piombo for example, the fact that it's totally clean, up not always 100% stable pure ice, meant that it was psychologically one of our harder climbs. Add to this the fact that we managed to onsight it all during the first ascent, and you can understand why it's something really special for us."

Leichtfried explained their personal first ascent ethics as follows "In recent years climbers have become more concerned about the style of ascent. For several years now we've been trying to climb without bolts as best possible, wherever the rock allows us to do so. But we avoid taking any unnecessary risks and if the rock formation doesn't permit anything else, then using bolts certainly isn't a style faux-pas. However, when it comes to comparing routes, one needs to use the same parameters and talk about the same things. Clean implies that the route, both before and after the ascent, is totally clean as the name suggests, without any in-situ pro or pro placed before the climb. Trad means that the route may contain normal rock pegs. Having said that, we're certain that everyone should choose whichever style they wish and not forget to have fun."