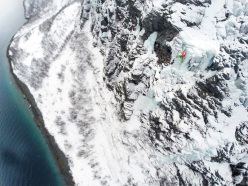 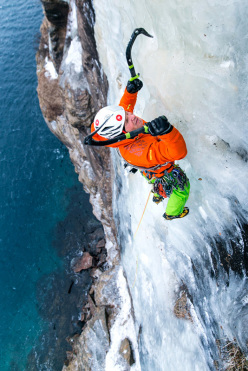 Three years after their last ice climbing trip to Norway, Albert Leichtfried and Benedikt Purner couldn't resist the call to the great north and so the two Austrian alpinists returned in February intent on climbing some new ice. This time the duo homed in on the Skjervoy comune close to Tromsø and the results, as always in these lands, are impressive to say the least. Apart from a series of shorter drips, what stand out are the slender, 500m+ lines that had formed thanks to the quite particular winter conditions. All routes were climbed on-sight and without adding pegs or bolts.

This year's winter in northern Norway was fairly similar to ours. Abundant early snowfall was followed by a three-month dry period with southerly winds. Periods of warm alternated with intense cold and this resulted in a host of ice lines in the entire area north-east of Tromsø that otherwise rarely come into condition.

Following the advice from my old friend Graham Austick, who settled down in this region a while ago, we booked tickets to Tromso and drove on with the obligatory 4x4 jeep, well above 70th parallel.

During the weeks that followed we simply couldn't believe our eyes. Graham hadn't promised too much - thousands of ice lines had formed throughout winter and were just waiting to be climbed. Spoilt for choice we became pretty picky and only climbed the longest, most beautiful drips, climbing mainly up thin smears from sea level all the way up to an altitude of 800m. Some routes felt absolutely endless. In keeping with our preferred style of ascent we left all routes as we had found them, without bolts and pegs - clean. After such an intense experience we realised once again why we are attracted to this region again and again.