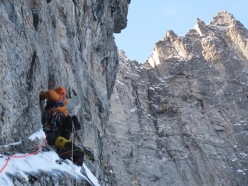 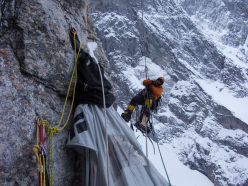 Andy Kirkpatrick, Tormod Granheim and Aleksander Gamme have made a winter ascent of the route Suser Gjennom Harryland on Trollveggen (Troll Wall) in Norway.

As far as cold walls go, you can't get much colder than the infamous Trollveggen in Norway's Romsdal Valley. The 1100m high peak - famed as Europe's biggest vertical rock face and also known as the Troll Wall - has circa 15 difficult lines up its sheer north face including Suser Gjennom Harryland, an 18-pitch route on the left hand side of the peak which finishes on the mountain's shoulder, established in 1996 by the Norwegians Halvor Hagen and Kyrre Østbø with difficulties up to VI A3 up this 600m route.

This climb has now been repeated by Britain's Andy Kirkpatrick and Norway's Tormod Granheim and Aleksander Gamme who spent an arduous 14 days on the wall, during which they endured temperatures down to -20°C. The trio climbed this overhanging, weaving line capsule style with a camp at pitch 5 and one at pitch 10. According to Kirkpatrick conditions were "Super calm but cold (down to minus 20), with some wind and snow on last 2 days of climb" and the climbing itself proved "Technical and steep, mostly safe, but with most pitches having loose features to avoid. Bolted belays and some lead bolts (many of dubious quality), as well some rivets and minimal fixed gear (copper heads and pegs)."

What makes the recent ascent noteworthy - and remarkable - is that while Kirkpatrick is certainly no newcomer to long mountain routes, this was the very first big wall experience for both his Norwegian partners who undoubtedly feel more at home on skis than on hard aid: last year Gamme made a solo ski to the South Pole, while in 2006 Granheim carried out the first ski descent of Mount Everest's North Face via the Norton Couloir (during which his Swedish partner Tomas Olsson tragically fell to his death). Kirkpatrick explained his choice as follows: "This may seem like a rather odd/foolhardy thing to do, but then I have a lot of experience in climbing with ‘non-qualified” partners, and know that you should judge a potential parter not by their ability to tie knots but by their other attributes first: sense of humor, resilience, a track record of having performed in a trying environment (mentally and physically) before you make a decision about their ability to climb a wall."

The trio topped out on 28 January and required a full day for the descent. It is worth noting that Kirkpatrick had attempted this route in September 2011 during an extraordinary solo but had wisely turned around on the penultimate pitch after listening to his inner voice realising that the moment wasn't quite right. Norway's Sigurd Backe, Rolf Bae, Sigurd Felde and Trym A. Saland climbed the route right at the end of winter in March 2007.

British interest in the Troll Wall dates back to 1965 when Britain's John Amatt, Tony Howard and Bill Tweedale made the ascent of The Rimmond route up this massive gneiss face. The climb went by largely unnoticed and was later described by Joe Brown as 'one of the greatest ever achievements by British rock climbers.' During precisely the same time period the Norwegians Leif Pettersen, Odd Eliassen, John Teigland and Ole Enerse established the Norwegian route and both these climbs marked the start of alpine exploration of this sinister face.

For a full account of the recent ascent check out Andy Kirkpatrick's andy-kirkpatrick.com