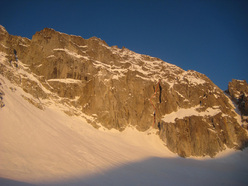 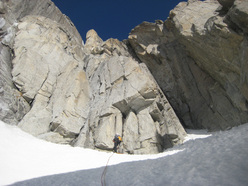 Young Francesco Salvaterra continues to explore Mount Presanella, the highest peak in the Trentino region of Northern Italy and after having put up Alice in Wonderland last January, the East Face has now been enriched with Depravation. Salvaterra forged the new line together with Patrick Ghezzi to the right of the 1950 Clemente Maffei and Enzo Violi route, with five pitches and difficulties up to TD+/ED- WI5 M6 VI+ A1/2. On reaching the shoulder the two did not continue to the summit but given the dangerous snow conditions they abseiled off. Salvaterra's short report is published below.

Climbing this route was extremely satisfying, it's only five pitches high but all are extremely beautiful, difficult and different, the rock is always splendid and the scenery is grandiose.

The conditions were relatively good, with a thin ice vein on pitches one and three which allowed the leader (at least) to climb well. The rock sections are just as demanding and although we believe the aid sections can be climbed free, we preferred to continue with crampons clipped on, ready for the next mixed pitch. Due to the poor snow on the upper section we were forced to abseil off from the shoulder where the major difficulties had come to an end; one can continue far more easily up to the summit from here.