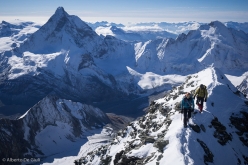 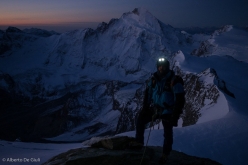 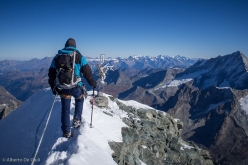 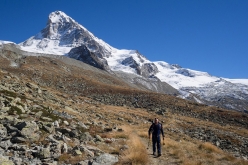 Dent Blanche is a beautiful mountain in Val d'Herens, in the canton of Valais in Switzerland, a pyramidal summit reached by four rock and snow ridges. The normal route that leads to the 4357m high summit is the South Ridge, also known as the Wandfluegrat, a beautiful alpine crest that can be compared to the Hornli Ridge on the Matterhorn. The Wandfluegrat is much more pristine, with only a handful of insitu pegs and bolts placed only where they are absolutely necessary, and some ring bolts in the gully to the left of the Grand Gendarme.

In Val d'Herens then there are no ski lifts and the beautiful Cabane Rossier hut is reached via a 5-6 hour walk and a 1600m altitude gain.

The normal route up the South Ridge cleans up very quickly after snowfall and climbing it at the end of the season is a real pleasure for those in search of tranquility and splendid autumn colors.

The ascent and descent times are similar to those on the Matterhorn, 4/5 hours ascent and just over 3 hours descent for a party that is quick at doing rope manoeuvres and that doesn’t get slowed down by others.