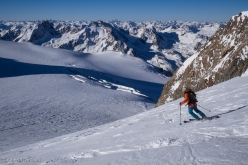 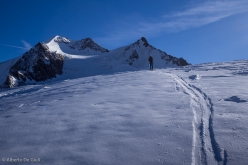 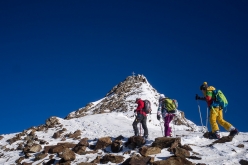 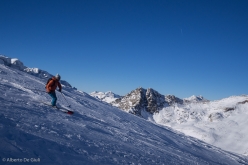 December is upon us and the snow situation in the Dolomites is reminiscent of last year, except that the summits are white, providing a slightly wintery look. Last week’s Föhn munched the snow on Marmolada, the only place where at present it’s possible to do a bit of ski mountaineering. So on Saturday I hopped across the border into Austria and the glaciers above Pitztal are in pretty good nick.

We took the lifts to Mittelbergjoch and then skinned up to Wildspitze, the highest mountain in Tyrol and the second highest in Austria after Großglockner. We ascended via the classic route from Mittelbergjoch which, with 700m elevation gain, leads to the summit. We descended via the same route, and then skinned back up 100m to reach the pistes and return down to the valley using the lifts. At the start of the season one usually has to descend via the ascent route, but in spring and with decent snow cover the descent down Taschachtal, 20km long and with a 2000m, is simply not to be missed.