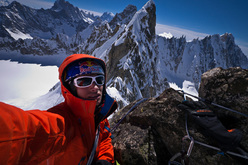 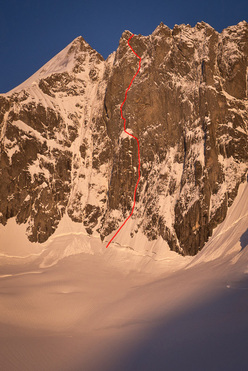 David Lama increasingly in alpinist mode, one who continues to amaze. Just like during his latest, solitary ascent of Les Barbares a few days ago. A demanding route - established from 11 - 15 February 2003 by Frenchmen Stephane Benoist and Patrick Pessi with an overall grade of ED 5.9 A2+ 80° mixed - which follows a logical 500m line up the NW Face Pointe Pré de Bar in the Mont Blanc massif. After the first ascent the two suggested the name Pointe Raphel Borgis du Pré de Bar, and in 2010 the line was repeated by Louis Laurent, Pierre Labre and Aymerik Clouet. At present there is no information about other repeats and Lama's ascent therefore, as well as being the probable second repeat, could well be the first solo ascent.

Apart from these details which need confirming, what is certain is that the recent climb was certainly a beautiful adventure. Lama placed his tent on the Argentière glacier and approached the route in the depth of night, then set off at 4.00am and soloed the easier sections until the terrain became more demanding and he started to self-belay.

After a tricky rock section he reached the middle of the wall at about 7:30 am, where he paused briefly before continuing up past some complex climbing which involved the use of aid. A short pendulum led to the steep crux which the Austrian described on his site as follows "The following 50 meters are the crux of the whole face. The placements are not too good and the climbing is even more demanding than on the pitches before. It takes me one and a half hours to reach the next belay. Now the way to the top is free."

Free, well sort of, because Lama had to confront a series of thinning veins of ice which barely held his body weight to finally summit in the late afternoon, after 13 hours on the trot. The abseil down the line of ascent required total concentration and he returned to his tent three hours later, "dog tired ."

The next day he descended to Chamonix and told planetmountain "This is certainly the hardest route I've ever climbed in the Mt Blanc range. Last year together with Peter Ortner I climbed the Colton-MacIntyre up the North Face of the Grande Jorasses and although it's twice as high, it's by no means as difficult. Les Barbares climbs what is possibly one of the hardest faces above the Argentière glacier: a rock bastion with very few weaknesses. Subtle veins of ice give way to demanding rock sections. The climbing is complex but also extremely beautiful. Yes, it's definitely one of the best routes I climbed this season! I'm really happy and really tired..."