► News ► Alpinism ► Dave MacLeod climbs his Castle in the Sky 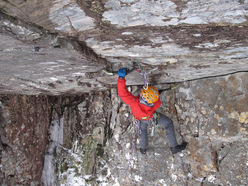 Dave MacLeod on his Castle in the Sky, Druim Shionnach, Scotland.
Photo by Andy Turner

Dave MacLeod climbs his Castle in the Sky

Scottish climber Dave MacLeod has created what he describes as "an amazing little route" which, he concedes, "doesn’t look like your average Scottish winter route." A quick glance at the photograph and reveals why: instead of rime ice and long gullies, this 60m climb at Druim Shionnach breaches a 5m horizontal roof via some very acrobatic drytooling. In true Scottish style, the route continues boldly for another 4m above the lip before any other decent pro can be placed.

MacLeod initially climbed the roof with the use of aid to work the moves and although a peg was placed which holds bodyweight, MacLeod is unsure as to whether it would hold a fall. So why no bolts? The reason is simple: "Bolting it is out of the question" MacLeod explained to planetmountain " since there are no bolts in the Scottish Mountain cliffs at all. Even if that was an option, I'd be equivocal about it. I'd enjoy it as an M10+, and I could do in a try or two with bolts. But without it's a much harder proposition and has a bit more to it."

MacLeod then explained that Castle in the Sky is possibly a grade harder than Don't die of ignorance and similar to Anubis. Both his creations, the latter unrepeated since its first ascent in 2010.