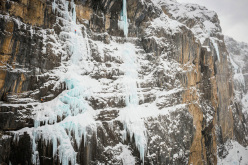 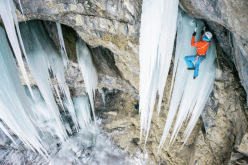 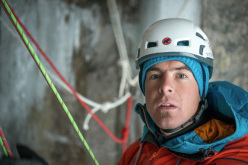 On the Breitwangflue in Switzerland Dani Arnold has climbed three difficult ice and mixed routes, Flying Circus, Mach 3 and Crack Baby in a single day.

On 17 January 2013 highly talented Swiss alpinist Dani Arnold travelled to the Breitwangflue in the Bernese Oberland where in a single day he climbed three of the hardest and most famous ice and mixed climbs in the area: Flying Circus, Mach 3 and Crack Baby. A relevant achievement: circa 650m of ice and 21 pitches, all led by Arnold that now join his impressive climbing curriculum which includes his fast ascent of the North Face of the Eiger.

These are the details of the ascents: 05:30 departure from Kandersteg, 08:00 the start together with Walter Fetscher up the 165m high Flying Circus, a mixed route established in 1998 by Robert Jasper and famous for being the world's first M10 climb. Despite a lack of ice on pitch one (which forced the duo to climb the easier variation) things ran smoothly. At 11:30 it was Renato Gisler's turn to belay Arnold up Mach 3, 150m first climbed by Robert Jasper and Markus Stofer with difficulties up to IV M9 - a "battle" which was by no means easy, but which the 29-year-old ice climber won convincingly. At 16:30 Arnold tied in with Fetscher once again to climb the 340m pure ice line Crack Baby.

"Up to half-way conditions were OK" recounted Arnold "I was fairly sure that I'd succeed. But then, at the first hard pitch, I suddenly realised that it was completely dark." Furthermore, ice conditions were far from ideal "every time I moved, something broke. I felt like an elephant in a glass shop." Following the beam of his headtorch the Mountain Guide continued delicately, one metre after the next to reach the top at 21:00. Too tired to shout for joy, but certainly ready for his next journey: in Patagonia together with David Lama.