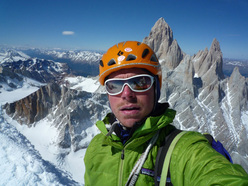 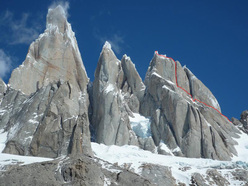 Colin Haley has had a great start to his Patagonian season with the first solo ascent of Cerro Standhardt. Despite missing out on the long weather window (which enabled, amongst others, the South Tyroleans Holzknecht and Moroder to summit both Fitz Roy and Cerro Torre) Haley made best use of a two-day spell last weekend.

On Saturday 27 November he set off from the Niponino bivouac at the foot of Cerro Torre and reached the start of Cerro Standhardt's classic Exocet route at 4.00am. After climbing the easy starting ramps Haley reachd the four-pitch granite chimney that splits the headwall and soloed the first two pitches (WI4, WI5) and self-belayed the entire third pitch (WI5) and a short 10m section on the fourth pitch (WI4). Above the chimney he self-belayed a smooth mixed slab, continued and climbed the summit mushroom at 4:00pm, 12 hours after setting off. The descent ran smoothly and the 26-year-old returned to the bivvy shortly after nightfall, just before the rains set in.

The American alpinist is known above all for the coveted first-ever Torre Traverse together with Rolando Garibotti in 2008, during which the climbed the Exocet route. This was first ascended by the Americans Jim Bridwell, Greg Smith and Jay Smith on 28-29 January 1988, received it's first winter ascent at the hands of the Austrians Tommy Bonapace and Toni Ponholzer in September 1990 and was almost soloed by Bonapace in April 1994 when bad weather forced the alpinist to retreat 3 easy pitches below the summit.