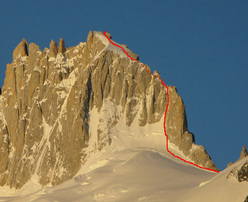 Aguja Guillaumet from the east, showing the Amy Route.
Photo by Colin Haley 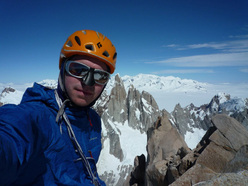 PORTFOLIO / gallery Portfolio: Colin Haley and the video of his solo ascent of Aguja Guillaumet in Patagonia

The video of American alpinist Colin Haley's 20/12/2009 solo ascent of Aguja Guillaumet in Patagonia, via the Amy route. The film was made by Haley with a video camera mounted on his helmet.

The Patagonian 2009/2010 season is revealing itslef to be increasingly difficult. Nevertheless, 25 year old Colin Haley from America has made the most of short weather windows and carried out to quick raids on a couple of classic routes in the area. The first was in the Fitz Roy range, namely the historic route up Aguja Poincenot, first ascended by Frank Cochrane and Don Whillans in1962 (TD, 4/5, 600m), while the escond was the 450m high Amy route up Aguja Guillaumet, first climbed by the Frenchmen Bernard Amy and Pierre Vidalhet in 1968.

Haley, who in 2008 carried out the coveted first Torre Traverse together with Rolando Garibotti, needed circa 2 hours to ascend Aguja Guillaumet. His return to El Chalten was delayed slightly though as during the descent he helped another climber who had lost contact with his partner, fortunately found later on. The ascent is noteworthy also thanks to the video camera Haley mounted on his helmet. The subject matter is intense... so much so that it almost feels like being there, climbing with him.