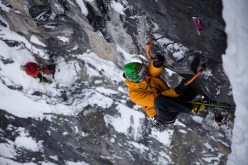 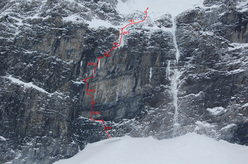 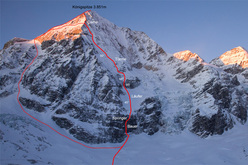 Checkmate by the Riegler brothers on Gran Zebrù

In winter 2010 Florian and Martin Riegler carried out the first ascent of Schachmatt - Checkmate- 1000m M10+ WI5 55°) on the North Face of Gran Zebrù.

"The most beautiful ice wall in the Alps" This is how Kurt Diemberger described the Königswand, the North Face of the Gran Zebrù after his historic climb in 1956. The South Tyroleans Florian and Martin Riegler know a thing or two about this too, since this winter they climbed the immense face via their new Schach matt, or Checkmate. The route climbs thought the overhanging rock bastion with seven drytooling pitches up to M10+ to reach the snow slope which in turn leads to M5 rock section before proceeding up the long slope to the ridge. The drytooling pitches were established during a couple of sessions, while the ascent was carried out on 7 January, documented by video and described by Florian in his report published below. Two months later the Riegler brothers returned to redpoint the pitches which hadn't been freed. One thing is certain: on the basis of what they're written and the name they gave to he route, the experience proved decisive. Well yes, checkmate.


07.00 The overhanging wall at the start offered good protection from avalanches and we sorted our gear. Due to the continuing bad weather we had decided to only climb the technical and difficult lower section. But all of a sudden the clouds lifted. I looked at my brother and knew we were both thinking the same thing: Rock&Roll Baby, today's the day for the King! We were in high spirits and certain we'd be able to reach the summit if we climbed quickly and if we ascended the fixed ropes. 1200m of rock, ice and snow lay ahead of us, as well as one of the hardest approaches. After the fifth pitch we reached a sort of balcony and we stopped to discuss whether to continue or whether it would perhaps be better to turn back. From here it was still possible to abseil off, while continuing would make a descent difficult and we didn't have any bivy gear. We decided to continue on up.

13.00 We were slap bang in the middle of the wall. The continuing cold was getting to me. The second half of the face wasn't too steep so once again we climbed without a rope to be quicker. But the fresh snow really slowed us down. Every 10 steps we had to stop and catch our breath. The weather got worse and the summit of Gran Zebrù was shrouded in clouds. The wind picked up and it started to snow again. Visibility dropped to less than 100m. All I could hope for was that there were no hard rock sections above us, and that we wouldn't climb up a dead-end gully.

15.00 We reached the summit ridge at circa 3650m. It was hailing and the wind almost blew me off my feet. Somehow we needed to traverse left to find a safe descent. The summit was out of the question. Ice and snow stuck to our faces. We had to shout to communicate through the storm and time was running short if we wanted to exit the face before dark. I began to lose sensitivity in my fingers and started flapping my arms and moving my fingers. I felt the cold penetrate my head in an attempt to shut it all down.
Precise orientation was impossible. I navigated using my seventh sense. I walked until the rope ran out and repeated this five times. Then my brother and I continued in unison. Darkness set in and the cold became unbearable. We trembled all over, our feet seemed to belong to a foreign being and the feeling our fingers was a thing of the distant past.
We slowly thought we could make out the East Gully. Even if we could only see the outlines of some rocks and the slope, we believed this would lead us out of our misery. Instinctively we took one step at a time, ignoring the fact that the gully might be avalanche prone.

18.30 It was almost dark and the storm whipped our faces without mercy. We remained roped together so as not to lose each other. In the beam of our headlamps we stumbled down gullies, snow slopes and brief rock sections and continued to ask ourselves whether we were on the right track... We stopped briefly when we reached the glacier. We felt as if we'd reached safety despite knowing that there were crevasses and the bergschrund somewhere out there. The final ascent to the base of the route began. We were both exhausted and each tracked 20 steps before the other took over.

19.00 We reached our skis completely spent. It was still snowing strongly and although we couldn't see anything we somehow managed to descend the almost 1000m to Solda. We had to stop regularly and illuminate the area to find the right slope down which to descend.

20.00 I took my gloves off and was stunned. My fingers were frozen, white as snow and they burnt terribly. Two aspirins proved useless and we immediately went to the closest hospital at Schlanders, where they diagnosed 2nd and 3rd degree frostbite on my left big toe, on both small fingers and on my right hand middle finger. I spent the next week in hospital.

We called our route up the North Face "Schach matt" (Checkmate). We hadn't won. But we'd survived!

Two months later the Riegler brothers returned to their route and redpointed all the remaing pitches. Furthermore, from 85m height they carried out the first Base Jump off the Gran Zebrù.