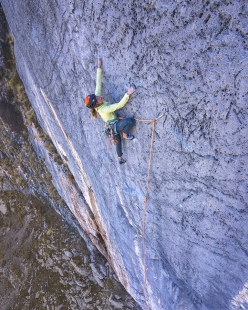 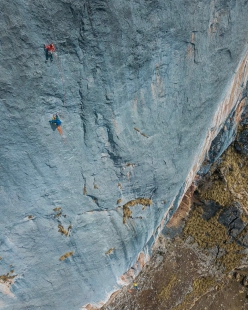 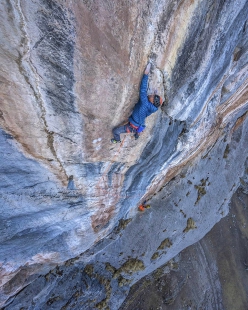 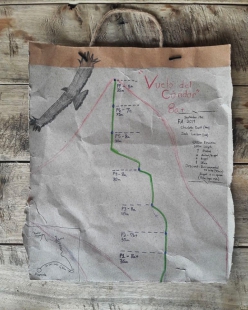 At an altitude of 4600m Charlotte Durif and Josh Larson have established Vuelo del Condor, a difficult new multipitch up Kuntur Sayana in Peru.

French climber Charlotte Durif and American climbing partner Josh Larson have established Vuelo del Condo, an interesting new multi-pitch sports climb in Peru. Located at an altitude of 4600 meters on Kuntur Sayana close to Pitumarca, the pair discovered this immaculate limestone face last year during their A World Less Traveled climbing trip around the world and returned this season with the route in mind.

The seven-pitch route was established over a period of nine days. Swinging leads, the duo freed the line on 19 September, climbing quickly on the upper section to avoid an incoming storm. The route boasts seven pitches of fairly sustained difficulties: 8a+, 7b+, 8a, 8a, 8a, 7c, 5-.

6:30am is when the sun hits the first pitch - a sustained 35m 8a+. Neither of us were warmed up but we were ready and that’s half of it. I took the lucky draw and pulled on first. Before we knew it, we both were at the anchor of Pitch 1. Damn! Let keep this pace up for the remaining 6!? • Fast-forward • I made it to the anchor of the 5th pitch (8a) out of breath, cramped arms from climbing, belaying and hauling and maybe dehydrated. It felt good knowing it was the last hard pitch - two more until the summit. As @chadurif started to follow - thunder roared in the distance. Then lightning. Wind picked up. You could see that it was a dark snow storm. It was about to get epic if we didn’t move fast. It seemed like Cha and the storm moved in sync...closer and closer. She arrived, took one min to catch her breath and she took off on the last two pitches - linking them into a 60m pitch (7c into 5+). We reached the summit completely out of breath and wrecked but so damn happy we did it and did it together. “Vuelo de Condor” 8a+ Bolted and FA by @chadurif and I over the course of a 9-days! Damn it was freaking fun!!! • It seemed crazy to do something like this at high altitude and in a remote village in the Andes of Peru. But hey, we tried our best and did the thing • Length: 230m / 754’ Elevation: 4800m / 15,748’ 7 pitches: 8a+, 7b+, 8a, 8a, 8a, 7c, 5- Two pancakes and a hard boiled egg in my pocket. Water and stoke • Thank you to all! @mountainhardwear @petzl_official @7aescueladescalada @cocorsirvas and @frictionlabs @fiveten_official @jan_novak_photography (who took photo 1) and hung out on the wall with us to document the times! #mountainhardwear #petzl #peru #pitumarca #pitumarcaclimbing #vuelodecondor

30.10.2009
Charlotte Durif 8c+ climbing fest in France
In October Charlotte Durif from France carried out the first ascents of two 8c+, Pull Over at the Grotte de Galetas in Verdon and The Wall at Combe La Vielle.
30.06.2006
European Championship Lead Yekaterinburg: David Lama and Charlotte Durif win biggest prize
First verdict from the European Championship in Yekaterinburg, Russia, with climbing's new school taking home the biggest prizes. The men's title goes to the young and super powerful Austrian David Lama, who continues to amaze all, while the women's title goes to the 16 year old Charlotte Durif.