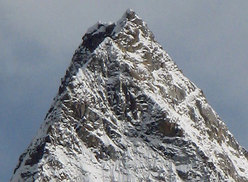 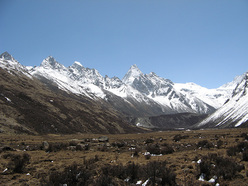 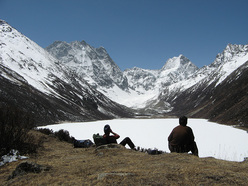 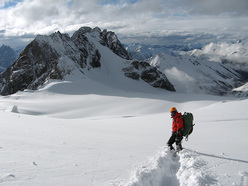 The British Manamcho Expedition climbed with the support of the Shipton-Tilman Grant, the Mount Everest Foundation., the British Mountaineering Council and the Alpine Club.

In April 2007 Mick Fowler, Paul Ramsden, Steve Burns and Ian Cartwright made the first ascents of Manamcho (6264m) and Point 5935m in the Nyainqentaglha East Range in Tibet.

In April 2007 a small 4 man British expedition comprised of Mick Fowler, Paul Ramsden, Steve Burns and Ian Cartwright headed to the remote Nyainqentaglha East Range in Tibet where they managed to make the first ascent of the prize Manamcho (6264m) and Point 5935m.

Attentive readers may remember that Fowler had travelled to exactly this area in 2005 when, together with Chris Watts, he made the first ascent of Kajaqiao (6447m). The duo had originally been lured by the idea of climbing the so-called ‘Matterhorn of the Nyainqentanghla’ but a combination of poor maps and wrong permits resulted in the duo having to “make do” with Kajaqiao instead of the intended Manamcho.

Undeterred, Fowler returned this year to set the record straight: the four received special permits once again to enter the area which is still officially closed to foreigners and split into two two-man teams to carry out the climbs alpine style. Mick Fowler and Paul Ramsden ascended Manamcho in an 8 day round trip from Base Camp (finding time later to explore the adjacent Manam valley) and rated the ascent TD and one of their most memorable ascents due to the "striking appearance, remote position and spectacular views."

Steve Burns and Ian Cartwright ascended nearby Point 5935m on their second attempt after Burns had vecome ill on the first attempt. Thanks to the lay of the mountain their ascent gave invaluable information about the hitherto unexplored surrounding area. The three-day ascent involved mixed climbing of AD.

Mick Fowler and Paul Ramsden often team up together and in 2002 they were awarded with the Piolet d’Or for their first ascent of the Central Couloir on Siguniang's North Face, China.

Manamcho is the striking mountain that Tom Nakamura originally christened the ‘Matterhorn of the Nyainkentanghla.’ Its photo appeared on the cover of the Japanese Alpine News in 2002 but the maps of the area are poor and the photo was mistakenly captioned Kajaqiao. Mick Fowler and Chris Watts went to climb it in 2005 and discovered the mistake which, of course, meant that they had a permit for the wrong mountain. Kajaqiao was exciting enough and was duly climbed but the urge to climb the original objective of Manamcho was such that MF had to return in 2007 with Paul Ramsden.

After acclimatising, during which Paul nearly ended the expedition by damaging his back doing up his boot, they left base camp on 19th April. The approach to the foot of the NW ridge was across an extensive glacier plateau and then up classic alpine north face terrain. The ridge itself was mainly snow covered rock at grade IV standard although probable incompetent route finding necessitated a skyhook move at one point. In ascent three bivouacs were necessary above the bergschrund and heavy snow each night added to interest. At one point a 20m section of new snow parted company with Ramsden attached. The third bivouac, 75m below the summit, was nose to tail and about 2 feet of snow fell in the night. This made for claustrophobic bivouacking, the situation not being improved by the summit day dawning memorably windy. This was good for the complexion but poor for views. Visibility on the summit was such that the hoped for panoramic view of stunning unclimbed mountains was non existent. Traditional summit photos were taken which could have been anywhere in the world with snow, mist and storm force winds.

Snow continued to fall throughout the entire descent and was waist deep by the time they reached the glacier below the mountain. Base camp was returned to, in continuing heavy snow which was knee deep in snow shoes at many points, on 26th April.

Overall the standard was about TD but the striking appearance, remote position and spectacular views were such that both climbers rated this as amongst their most memorable climbs.

Point 5935m
Steve Burns and Ian Cartwright chose to attempt pt 5935m which rises to the NW of the large glacier plateau north and west of Manamcho and Kajaqiao. This was identified as a fine peak in its own right but also as an excellent viewpoint from which to clarify the layout of the area, something which had proved impossible to do from available maps.

Initially Burns and Cartwright left base camp at the same time as Fowler and Ramsden. However, after 2 days and at a height of about 5600m, Burns began to feel ill, possibly with AMS, and it was decided to retreat to base camp.

A second attempt was made starting on 27th April. Despite horrendous snow conditions, left by the bad weather the Manamcho team experienced, Burns and Cartwright persevered returning to their highpoint on 28th April and continuing to reach the summit on 29th April. The weather was perfect and the final section involved superb mixed climbing of AD standard.

The summit views were expansive and helped to clarify the layout of the mountains in this area.

Manam Valley
Fowler and Ramsden were able to spend a day exploring the Manam valley which cuts deep into the Nyainkentanghla East range between Lhari and Tatse. The local headman here had never set eyes on Europeans before (except on his satellite TV!) and it would appear that the mountains had never been seen by westerners before. Both Fowler and Ramsden were inspired by what they found and felt the Manam valley to be one of the most beautiful they had ever visited.