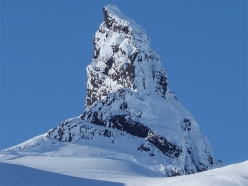 On the remote island of South Georgia (Southern Atlantic Ocean) Stephen Venables, Skip Novak, Crag Jones, Henry Chaplin, David Lund and Simon Richardson climbed 8 mountains, including the first ascent of the spectacular Starbuck peak and the remote and difficult Mount Baume, one of the highest unclimbed peaks on the island.

In mid-September 2016, Stephen Venables, Skip Novak, Crag Jones, Henry Chaplin, David Lund and myself made a four day crossing on the yacht Pelagic Australis from the Falkland Islands to the Sub-Antarctic island of South Georgia.

We then made a 16-day ski traverse across the Salvesen Range climbing peaks along the way. Highlights were the first ascents of the prominent Starbuck Peak (1434m) and the remote Mount Baume (1912m), which was one of the highest unclimbed peaks on the island.

We also climbed one other new peak and made second ascents of three others. The climbing involved a mix of Alpine and Scottish winter techniques. Although we had exceptionally good weather by South Georgia standards we were still pinned down by a five day storm and had 160 kph winds at the end of the trip.