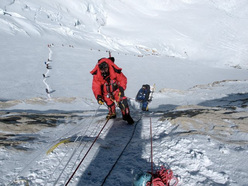 A team of Mountain Guides and Sherpa have placed some bolts on Everest to make the South Face route safer.

The news is just a couple of days old: the first bolts have been drilled on Everest, precisely on the Yellow Band at 7700m. The highest bolts in the world were placed by a team of Mountain Guides and Sherpa to make the South Face route safer and circa 30kg of old fixed ropes were removed. The plan is to fix ropes along the entire roue, bar the dangerous Icefall which continues to collapse dangerously.

Eric Simonson, the leader of the commercial IMG Expedition stated: "Yesterday was a historic day for route making on Everest. Kari Kobler donated his Hilti bolt gun and guides Willie Benegas and Adrian Ballinger drilled six new 10cm Mammut stainless steel bolts up on the Yellow Band to anchor two new ropes — one for up traffic and one for down. Good work you guys. In the process they also cut down over 30kg of old rope. The immediate beneficiaries will be the sherpas, who have had to deal with a spider-web of old ropes over the years. Now, this is much safer for them. When the climbers start going up to the Col in the next few days they will find that this makes it a lot faster and less confusing. We are hoping to do the same thing up on the Geneva Spur next, and hopefully up in the rock step below the South Summit too."

This news is food for thought. In many ways it confirms all that has been said and written about the crowds on the highest mountain in the world. Eric Simonson's word choice "traffic" seems indicative therefore and, from a nostalgic point of view, is disheartening when one thinks about the mountains and history and future of mountaineering.

Ethical debates aside, it's a given fact that the "Via Ferrata" up the South Face of Everest - as Reinhold Messner stated once again at the latest TrentoFilmfestival - will host circa 500 climbers this season. Safety should not be underestimated, above all for those who like the Sherpa and Guides work there but also their clients, is something which

What seems certain is that the 6 bolts won't render Everest any easier or less dangerous, above all for the "improvised" alpinists. What is certain also is that symbolically speaking, these bolts place the final seal (at least on Everest) on the end of an era. In all honesty this era, on the highest mountains in the world, seems to have been sealed conclusively a long time ago.