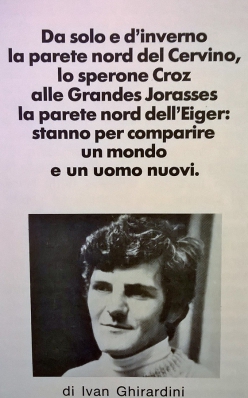 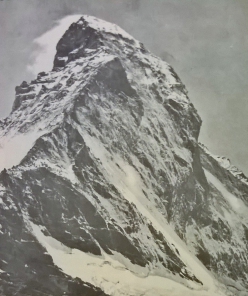 Black and white, Ivan Ghirardini and the three North Faces solo in winter

Thoughts about the history of mountaineering. The solo winter trilogy carried out by Ivan Ghirardini up the legendary three North Faces of the Alps: the Matterhorn, Grandes Jorasses and Eiger. By Ivo Ferrari.

History should be remembered, it shouldn’t be mixed up with other stories ... every story deserves its own history. With this simple play on words, this morning I reread for the nth time... the fantastic trilogy carried out towards the end of the last century by Ivan Ghirardini.

End of December 1977, a 24-year-old alpinist embarked on his adventure. His idea was as simple as it was tremendously difficult: climb the famous three North Faces, the Matterhorn, Jorasses and Eiger, in just three months, in winter .. . alone and with a drive, I should point out, that was utterly unusual at the time!

Mountaineering and mountaineers were beginning, attempting, trying to change many of the unwritten rules about how to take to the mountains. The characters were strange, prepared and yet new to the game, conscious yet and unaware, and they came up with new ideas and undertakings that followed very precise patterns… enchainments, winter ascents, repeats and first ascents that would stimulate the "wonderful" eighties ... and the years to come.

Ivan Ghirardini began his "winter" with the Matterhorn, climbing up the Schmidt route on 21 December 1977, in a long, nine-hour day of total silence. The summit, a sheltered bivouac... two days later he was back down in Zermatt. "... The final part of the face was very delicate: unsettled powder snow blocked the climb and covered the finishing slabs…"

Saturday, 7 January of the new year, 1978. The time had come for the Croz Spur on the Grandes Jorasses. I’m impressed with how fast he was on the North Face of the Matterhorn, the time evidently was ripe, in mountaineering terms, and physically. He’d trained carefully and consistently to achieve something big!

"... while recuperating a peg, the sharp ice axe blade split in two as a result of the cold and repeated blows. I don’t have another one, but I have the distinct feeling that nothing can stop me now. I scramble through the final section of unstable rocks, and towards one o'clock I finally reach the summit…"

The date was 9 January, three days of ice cold climbing, during a snowy and cold winter, with woolen mittens, heavy boots, warm clothing, thermal layers... new gear that needed testing, there were no certainties!

March, the last month of winter, the time came for the infamous and impressive North Face of the Eiger. Fatigue had begun to set in, for while his body was on form, his mind needed to rest, success in this “new” enterprise (at the time the trilogy as science fiction) was stressful, required mental strength, drive and passion.

"... The last bivouac in the cracks above the spider was particularly tough. The wind blew violently all night long, the spindrift fell down the face and crept in everywhere. Sitting on a small ledge carved into the ice, hanging from two pegs, I was unable to sleep. So I was up at dawn, exhausted after four days of climbing... "

The Trilogy is a reality, nowadays clothing, logistics and training are put to the test with the latest, well-known undertakings. Tom Ballard amazed me, amazed everyone with his six North Face ... but if the bar has been raised, then I’d like to believe it’s also thanks to this Italian naturalized Frenchman who, when everything was unfathomable, managed to think and transform the three North Faces in winter into the winter Trilogy. ... now we’ll wait for summer!

This article was first published in the Italian version of planetmountain.com on 17/03/2016.