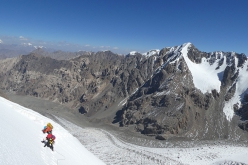 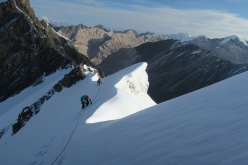 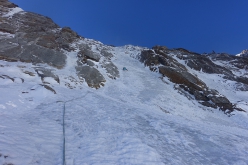 At the end of August, Noël Diepens (31), Line van den Berg (26), Wout Martens (27), Rik van Odenhoven (27), Mats Wentholt (27), Jorian Bakker (27) and team coaches Court Haegens (47) and Boris Textor (32) traveled to the Djangart Range in the central Kokshaal-Too. This was the last stage of the Royal Dutch Climbing and Mountaineering Federation’s two-year training program for young alpinists (NKBV Expeditie Academie). The program allows a new generation of talented Dutch alpinists to fulfill their alpine dreams and ambitions. During the past 2 years a team of 6 was trained and coached by experienced Dutch alpinists and guides.

During their 4 week trip in September to the Djangart area the complete Dutch team ascended 13 new routes of which 9 peaks were unclimbed before. The young team used terrain vehicles and horses to travel to the remote Djangart range in the central Kokshaal-Too. The Djangart area, consisting of 9 different valleys, received 8 expeditions before. The distances between the valleys are huge although the fit team decided to split up and climb in 4 different valleys from the same basecamp (41°44’57.4”N 78°57’3.7”E) . The team found in general very solid rock (mostly granite), good snow and ice conditions and stable weather. In combination with good team spirit, these ingredients made for a very enjoyable and successful expedition.

Summary of some of the ascents:
On the 9th and 10th of September Line van den Berg and Wout Martens established a new route on the north face of Pik Alexandra (5290m). The immense north face was conquered by a striking line leading directly to the summit which they call ‘Dutch Direct‘ (TD+, 85°, sections 90°, 800hm, 1100m). The mountain was only once climbed before via the East Ridge and never via its aesthetic north face. Van den Berg and Martens encountered one pitch sustained 85° ice, about 150 meters 80° ice and the face never eased below 50°. The ice was of dream quality, only the crux with vertical steps went in thin ice conditions. Around 4950m they set for a shivering night on a small windy ledge, unfortunately with a failing (refilled) gas canister and so no water or meal. Despite this, the team was able to finish the last hundreds of meters of the face the day after. After standing on the summit they descended via the aesthetically pleasing south side of the mountain, via a route that was neither explored before.

Line van den Berg and Jorian Bakker put up ‘Line of Decline’ (TD-, 450m, 600m, 80°, sections of 85°), a direct ice and mixed gully on the north face of Pik Currahee (5025m). Van den Berg and Bakker encountered Scottish climbing conditions for most of the day. The difficulties of the route centered in three crux pitches where the ice encountered was thin and steep, with sections of 85°. The name of the route is two-fold: it refers to the deteriorating conditions of the ice as the team came closer to the top, and to the expedition tiredness the team felt already before starting the climb. Van den Berg and Bakker descended on the West via the route of the first ascensionists.

On the 20th of September Mats Wentholt and team coach Court Haegens climbed a direct snow and ice line on the virgin north face of Pik Emma (4783m). They name the route 'Bas van der Smeede Tribute' (D+, 500 m, 80°) to honour and remember Bas, an enthusiastic alpinist and expedition climber who died by leukemia in 2017. Bas was very active within the Dutch climbing community and a very experienced expedition climber who focused on unclimbed routes all over the world.

Line van den Berg, Wout Martens and Court Haegens linked two unclimbed peaks (Pik Vsadnik, 4803m, and Pik Pionerov, 4874m) via an 3km long frontier ridge on the border with China. The route is called ‘No guts no glory ridge’ (D) because especially their guts made for a successful climb as this was their ‘warm up’ route of the expedition. During the ridge, the team encountered sustained difficulties that went maximum up to M4, IV+, 50° and it took the team 20 hours from camp to camp.

Noël Diepens, Boris Textor, Wout Martens, Rik van Odenhoven, Court Haegens and Mats Wentholt ascended Pik Ronald Naar 5014m by its NE face (AD+, 50°). Probably this was the last remaining unclimbed 5000 meter peak of the Djangart. They name the peak after Ronald Naar, a great man in the history of Dutch mountaineering. The team wants to honour Naar for his inspiration and huge contribution to Dutch alpinism.

A full expedition report can be found here soon: expeditieacademie.nl