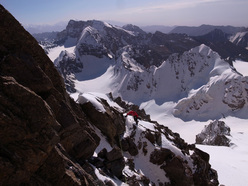 Jim Broomhead on Peak Alexandra with the still unclimbed peaks 5112 and 5025.
Photo by Kristoffer Szilas 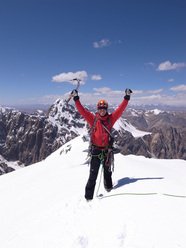 Danish alpinist Kristoffer Szilas reports about his expedition to the Djangart Region in Kyrgyzstan which resulted in four new routes.

This region has been visited by climbing expeditions in 2004, 2008 and 2010 but no one had previously climbed in the eastern part which we visited. We were inspired to visit this region after having read the trip report of the group that went to the western part last year.

We were flown in to our base camp by an old Russian helicopter to save time and to get to the more remote eastern part of the region. However, on the first day of the expedition it looked as if were not going anywhere, because the gas canisters we'd planned on using to melt snow weren't on the helicopter and our sat phone was not working either! To our extreme luck a family from Moscow trekked through our base camp the very next day and they had a sat phone we used to call for the helicopter to deliver the missing gas. The area has only had a handful of visits in the past and then we happened to be there on the very same day as the Russian family. They really saved our expedition..

During the next days we split into three separate teams and explored the mountains via four different glaciers. My climbing partner, Jim, and I managed to do the first ascent of a 5290m high mountain with one bivy at around 5000m. We named the mountain Peak Alexandra after his wife. Then we hiked 15km into the neighbouring valley and established camp up on the glacier to have a look at the highest peak in the area which is 5318m. However, this was too hard for us to attempt with the gear we had with us and because conditions were quite warm. This mountain remains unclimbed after being the objective of four expeditions!

We then decided to hike back to base camp and up to a 4950m mountain we had seen from there. We managed to climb this mountain despite white-out and some tricky Scottish-type verglas climbing, but on the way down the sun came out a warmed up the snow from the previous days of bad weather and soon we found ourselves down-climbing in a dangerous avalanche trap and were hit several times. Luckily we down-climbed steep ice fields where we could place good ice screws, so we were not swept off the mountain. We returned safely to base camp and decided to call the mountain Peak Lea after my girlfriend.

In short, we carried out some first ascents of several mountains in a remote region of the world and had a real adventure. What more could you ask for?"