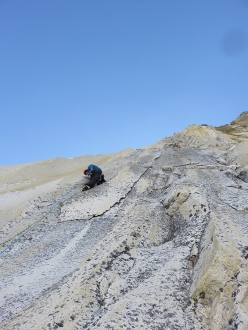 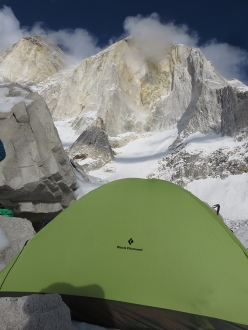 Our mountaineering expedition to Bhagirathi III in India’s Garwhal Himalaya left Italy on April 24. After dealing with the necessary paperwork in Delhi we headed off to Gangotri. From here two days of trekking took us to base camp at Nandavan on 1 May.

Damien Tomasi, Martin Elias, Sebastien Corret and I decided to attempt Estrella Impossible up the West Face of Bhagirathi 3, first climbed by the Catalans Joan Carles Aldeguer, Sergi Martínez, Josep Lluís Moreno and Juan Tomàs in 1984. Over 1000 meters high, this presents difficulties in the region of 6a/A3+ as well as some difficult and dangerous mixed pitches through the summit band of shale.

Prior to our ascent the route had 3 repeats, the fastest by a Canadian team that had required 8 days. The most recent dated back to 2003, when a joint Swiss / German expedition fixed hundreds of meters of ropes and left bolts at each belays. After 5 days of very hard climbing, and uncomfortable bivouacs, we reached the summit on May 13, happy and grateful for the weather that had been, on the whole, on the fair side.

The female members of our expedition, Fanny Tomasi-Schmutz and Elodie Le Comte, had their sights set on the SW Pillar, known as the Scottish Pillar or more simply Scottish Route, first climbed in 1982 by the Scotsmen Allen Fyffe and Bob Barton. Tomasi-Schmutz and Le Comte succeeded in climbing the rout from May 16 to 22.

A heartfelt thanks to Rajesh Negi, of the agency Himalaya Hikes for the exemplary organization of our expedition. And a special thanks to Black Diamond for its support.