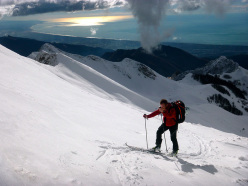 Ski mountaineering in the Apuan Alps: the final few metres to the summit of Monte Sagro
Photo by Giampaolo Betta 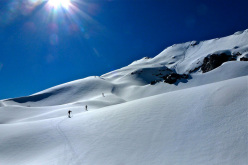 Ski mountaineering in the Apuan Alps: climbing up the hollows on Carcaraia
Photo by Roberto Bergamini 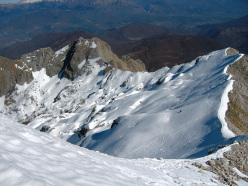 Ski mountaineering in the Apuan Alps: Carcaraia face seen from the summit of Tambura
Photo by Beppe Puddu 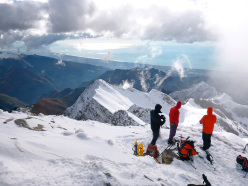 Ski mountaineering in the Apuan Alps: view from the summit of Monte Sagro
Photo by Giampaolo Betta

The Apuan Alps are a small mountain range in Italy's northern Tuscany. It runs parallel to the nearby Apennines and is separated by a single, broad valley called Garfagnana. On the other side, towards the south-west and lying at the foot of these peaks, is a narrow, densely populated strip of land called Versilia that then gives way to the Tyrrhenian Sea.

The contrast between the Apuan Alps and the nearby Apennines is stark. The two ranges are clearly visible from Lunigiana (the broad valley with river Magra): to the East the Apennines resemble an imposing bastion where no peak stands out particularly, while to the West, the Apuan Alps are a constellation of sharp, severe summits, each with a distinctive shape and personality.

Comprised mostly of compact rock (the famous white marble that contributed in making them famous and which is also the cause of the continuous, relentless quarrying) in summer the Apuan Alps lend themselves to pleasant rock climbing, especially on the excellent limestone of the lower peaks. It is in the winter however that these mountains transform into something quite unique: their proximity to the sea makes the very wet snow stick to the rock, even at unthinkable angles, thereby creating mixed routes that have no parallels in terms of commitment, continuity and beauty.

Since these mountains are generally very steep and rocky, they lend themselves more to mountaineering than to ski mountaineering. Apart from a handful of classic ski tours, ski mountaineering in the Apuan Alps is decidedly "alpine" and, to reach the summits, crampons are often used far more skis and climbing skins.

The views are quite unique and you certainly won't be disappointed. It's strange, after having two days spent on a cold shadowy face, or after having struggled up a north gully with skis strapped to your rucksack, to suddenly be up there, on a knife-edge ridge overlooking the Mediterranean Sea to soaking up the heat of two suns, one in the sky and one mirrored in the sea, before skiing down to the sea to smell the scent of thyme and myrtle. On more than one occasion, in particular in March, I've actually gone for a quick dip in the sea after having skied from Monte Sagro...