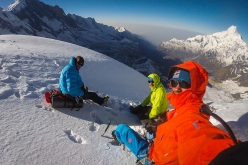 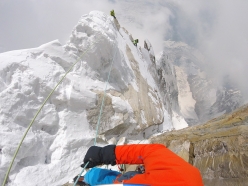 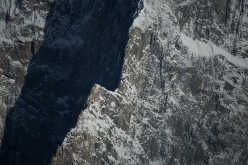 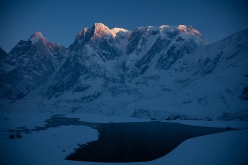 Video footage of the attempt to climb the Southeast Ridge of Annapurna III (7555m), carried out last spring by David Lama, Hansjörg Auer and Alex Blümel.

In spring 2016 Austrian alpinists Hansjörg Auer, Alex Blümel and David Lama travelled to Nepal to attempt one of the greatest unsolved puzzles in the Himalaya: the SE Ridge of Annapurna III. This 2300m line had been attempted for the first time in distant 1981 by the British mountaineers Nick Colton and Tim Leach who, on a post monsoon expedition together with Steve Bell, climbed 2/3 of the pillar in alpine style before retreating from 6500m. In the years that followed the route was attempted on various occasions, always without success, adding the aura and reputation of this immense challenge.

There’s no need to point out that Auer, Blümel and Lama are recognized as three of the strongest alpinists of the new generation. After three acclimatization rounds up the East Ridge - during which they reached 6000m - the trio was set for an attempt up the famous SE Ridge.

On day 1 they climbed quickly from the base of the mountain at 4700m, up a couloir that deposited them on the shoulder at 5900m where they made a bivy behind a serac. Mixed terrain on day 2, described by Colton as "not hard", turned out to be anything but easy and where the Brits had encountered acceptable temperatures, the Austrians were forced to fight against biting cold, strong winds and snowfall. A second bivy was made at 6400m, while day 3 turned out to be even more tiring than the previous days. Climbing at their limit, often with the use of aid, they manage to gain a further 150m circa before being forced to make their third bivy. At this point, Lama recounts “Our chances to reach the summit, in these conditions, and our thus slow pace, were quite slim.”

When the forecast arrived later that night, indicating an early end to the weather window, the trio had only one option: descend. Fortunately the descent ran relatively smoothly and after having safely returned to basecamp, the abandoned the expedition and left the mountain in mid-May. The footage from Lama’s helmet give an idea of the difficulties and total exposure along this magnificent crest which, once again, has remained unclimbed.