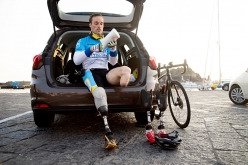 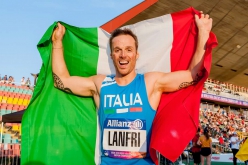 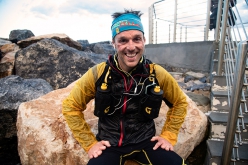 Andrea Lanfri at the end of his 0 to 0 on Monte Pisanino, September 2020
Photo by Ilaria Cariello

Starting at 9.00 am today, Italian Paralympic athlete Andrea Lanfri will travel the route from Marina di Pisa to Monte Serra and back, non-stop, alternating running and cycling. The event will be broadcast live on his social channels, to celebrate World Meningitis Day.

Italian Paralympic athlete and mountaineer Andrea Lanfri is celebrating World Meningitis Day by cycling from the beach of Marina di Pisa all the way to Monte Serra. On reaching the highest peak of the Pisan Mountains the mountaineer, who summited Mont Blanc last year, will change prostheses, put on his racing blades and run the 35km journey back to his starting point.

In 2015 Lanfri lost both legs and seven fingers following Fulminant meningococcal septicemia and his feat today, which forms part of his From 0 to 0 project, will be broadcast live on his social channels.