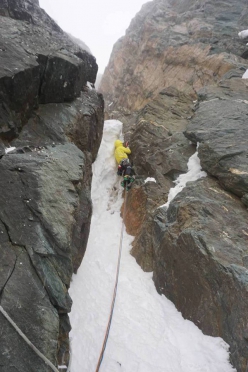 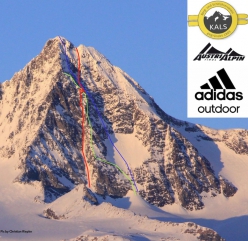 On 05/04/2016 the Austrian alpinists Vittorio Messini and Matthias Wurzer made the first ascent of Südwandwächter (M5, WI4+, 600m), a new mixed climb up the South Face of Grossglockner (3798m) in Austria.

More than two centuries after the first ascent of the Grossglockner back in 1800, the highest mountain in Austria still holds some surprises in store, especially - in this case - for those who know this peak better than most. In early April in fact Vittorio Messini and Matthias Wurzer, two mountain guides from Kals, the small town located at the foot of the "roof of Austria", established a new route up a narrow couloir on the South Face.

Messini and Wurzer left the Stüdlhütte hut early on 5 April and reached the base of the mountain, where they stashed their skis and continued wading up through the snowy gully for 250m to reach a first ice terrace. From here the terrain steepened, offering "winter climbing akin to that found in Scotland." They joined the South Ridge but instead of continuing along this classic route they abseiled for 20m, followed the Pillwax Rinne for 100m and then diverted off right, following another independent gully to the top.

"It's incredible to think that after the first ascent of this mountain in 1800, i.e. 216 years later, we still managed to find a new line" Messini wrote. The new route is called Südwandwächter, its 600m are graded M5, WI4+ Messini and describes the route as "characterized by modern mixed climbing, presumably one of the hardest of the mountain."