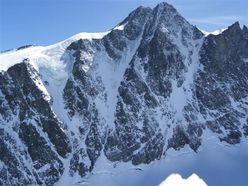 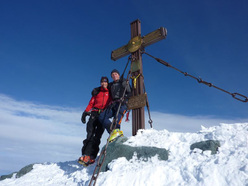 On the summit of Grossglockner, 3798m, Austria
Photo by Guide Alpine Gruppo Kals am Großglockner

The north face Grossglockner, Austria's highest mountain. is one of the most spectacular and impressive ice and mixed faces in the Eastern Alps and the circa 700m high face it is second only to the 1000m high North Face of Ortles. The first ascent was carried out in 1876 when three Mountain Guides from Heiligenblut cut out circa 2500 steps up the NE Couloir to lead Count Alfred Pallavicini up to the summit. This ascent doubtlessly represented a milestone in alpinism in the Eastern Alps and the Pallavicinirinne was first repeated only 40 years later, while the first ski descent of this face was carried out in 1961.

Since this first ascent over 30 climbs have been added to the Großglockner North Face, including Mayerlrampe, Berglerrinne, Eisnase and the latest addition, the 1985 Mountain guides route. Because of the rapid evolution of ice climbing techniques the face is certainly less difficult than when climbed in 1876, but the routes nevertheless remain difficult, sustained ice and mixed lines which should not be underestimated.

An ascent requires a night at the Glocknerbiwak and the start the next morning must be very early indeed due to the orientation of the Pallavicini & Berglerrinne. These face northeast and consequently receive the early morning sun for a few hours resulting in rock fall. It's important not to underestimate this fact as, unfortunately, this has already cost the lives of numerous climbers! Having said that, climbing any route up the North Face of the Grossglockner remains an unforgettable adventure and a must-climb for all alpinists in the Eastern Alps.