► News ► Alpinism ► Ala Daglar, climbing in Turkey through the eyes of Petit and Bodet
Versione italiana 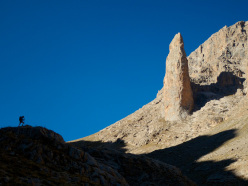 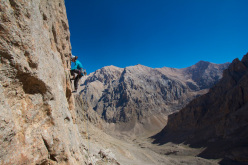 PORTFOLIO / gallery Portfolio: Ala Daglar, climbing in Turkey through the eyes of Petit and Bodet

Ala Daglar, climbing in Turkey through the eyes of Petit and Bodet

Arnaud Petit and Stephanie Bodet recently climbed in the Ala Daglar massif in Turkey where they carried out, amongst others, the first repeat of Red moon and Star put up by Rolando Larcher and Luca Giupponi.

At the start of September Arnaud Petit and Stephanie Bodet visited Turkey's Ala Daglar massif. Considering the fact that they have left their mark practically everywhere on the world's rock faces, a visit from these two ace French climbers was certainly on the agenda to this "Dolomite" massif which has recently been brought to international attention thanks above all to Italian climbers. Arnaud and Stephanie found the area to be charming and, to get a feel for the area, they first decided to check out some of the crags, above all Kazliki Valley which has come to be known as "Turkey's Margalef". Accompanied by their friend and local Petzl athlete Mumin Karabas they repeated a series of routes up to 8a such as "Muster of papets" and "French kamuflaj". This all served as a small warm-up for the mountains which are the real draw of the Ala Daglar region. Weather is never a problem in this mountain chain and so all they needed to do was carefully program their remaining days and energies. Arnaud and Stephanie first climbed "Cose Turche" at Kazilin Basi, the route established by Matteo Bernasconi and Davide Spini in 2011 and still not climbed free. Arnaud felt the route is extremely beautiful but unfortunately freeing one section is "impossible"...

After a fast repeat of the by-now classic "Orient" up Parmakkaya (280m, 7b, Helmut Gargitter and Pauli Trenkwalder, 2006), Arnaud returned to "Cose Turche" accompanied by the strong German climber Jörg Andreas to double-check on his initial impression. The result of this second day was that the route is possible, except perhaps for one point of aid and with difficulties up to 8c... So even Arnaud might need to return! At present the pitches are graded 7a+, 8c? (not freed), 8a/+, 8b+? (not freed), 7c+.

During the last few days Arnaud and Stephanie returned to Kazilin Basi and repeated “Red moon and Star”, the route first ascended and freed by Rolando Larcher and Luca Giupponi in November 2010. Arnaud on-sighted the entire line while Stephanie, seconding, only fell off one pitch. This is the first repeat of this route which Arnaud has defined as yet another Larcher masterpiece, psychologically very demanding and stressful, up rock which is loose at times. As to the grades, Arnaud believes these are substantially correct, with some 7b's being fairly low in the grade, while the crux pitch weighs in at 8a.