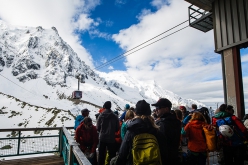 After the closure in June, the second section of the Aiguille du Midi cable car has been closed for an indefinite period due to maintenance works.

The troubled Aiguille du Midi cable car has once again been closed due to unforeseen maintenance works. The highest cable car in Europe that whisks tourists and mountaineers in juts a couple of minutes from Chamonix to the 3,777 meter top station on Aiguille du Midi had already been forced to close in June and yesterday the Compagnie du Mont Blanc ski lift company decided to close the second section that leads from Plan de l'Aiguille to the summit out of safety concerns.

This recent closure has come about after routine inspection identified “a similar defect on the same cable to that found last May” which resulted in the cable being replaced. The entire cable had been replaced in autumn 2017.

The first section from Chamonix to Plan de l'Aiguille remains open to the public until further notice. As a result of this inconvenience, the Flégère cable car operating period has been extend during this autumn.

It’s worth noting that the Skyway cable car on the Italian side of Mont Blanc is operating smoothly from Courmayeur to some of the most beautiful and classic climbs in the entire massif.