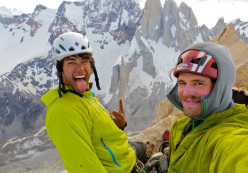 The video by Beau Carrillo and Tad Mccrea on the Whillans - Cochrane route on Aguja Poincenot in Patagonia.

Recently we've been reporting a great deal about Patagonia and quite rightly so seeing the outstanding quantity and quality of climbs which are being carried out this season. One of the area's most beautiful climbs remains the Whillans - Cochrane, the route first climbed in 1962 by England's Don Whillans and Ireland's Frank Cochrane who in climbing this line became the first to summit Aguja Poincenot. The route's hallmark is the beautiful slanting snow ramp which leads across the East Face to the South Face, where some mixed pitches followed by pure rock pitches lead to the cumbre. Out readers know this ramp well, we devoted much attention to it after the visionary first ski descent by Sweden's Andreas Fransson. Here we're presenting a great little video which depicts phases of the entire ascent, carried out this season by the young Americans Beau Carrillo and Tad Mccrea who described their ascent as "the raddest alpine adventure either of us had ever attempted."