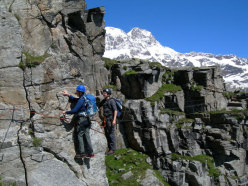 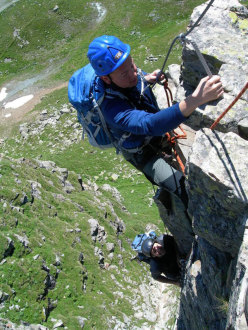 A via ferrata which starts at Alagna in the Alta Valsesia (VC) close to Monte Rosa, Italy, introduced by Mountain Guide Carlo Gabasio.

First and foremost the beauty of the landscape. Perhaps it is this which motivates those who who ascend this via ferrata. In fact, the Emilio Detomasi at Mount Cimalegna offers unique panoramas onto the famous Monte Rosa massif. A vision which can be gained obviously with the correct preparation needed to ascend this route which despite not being extreme, has a start which is both athletic and exposed. The 30m long Tibetan bridge deserves a special mention and the ferrata was rigged by the local Mountain Guides in memory of the Alagna ski instructor and mountain guide Emilio Detomasi who passed away in 2002.