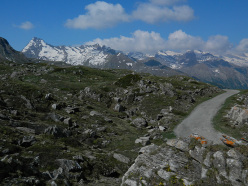 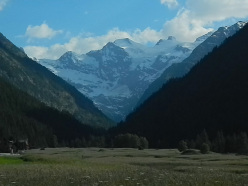 SuperAlp 7, between Gran Paradiso and Mont Avic: Cogne and the meadows at Sant'Orso
Photo by Simonetta Radice 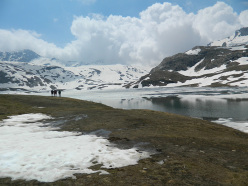 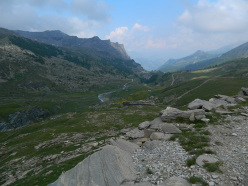 The new challenges of sustainable mobility, between big development projects and small steps. Courmayeur and the futuristic new Mont Blanc cable car. Cogne and its wonderful Sant’Orso meadows, searching for the right balance between tourist development and local economy. The second of the three part series of the 2013 SuperAlp! edition by our reporter Simonetta Radice.

We ended the first part of our travels on the top of the Aiguille du Midi. Now we're heading to Courmayeur and we easily cross the Italian boarder thanks to the free bus services connecting the two villages, part of the service provided by the Chamonix community. It's a stunning day and Mont Blanc dominates the small town in the Aosta valley, while its slate roofs shine in the sun.

Courmayeur is silent and not particularly crowded today, but if you glance at Punta Helbronner - where big cranes are hard at work building the new Mont Blanc cable car - it's easy to understand why. The new cable car is scheduled to open in autumn 2015 and until then tourists who wish to reach the summit of the big mountain are more likely to cross the tunnel and use the cable cars on the French side.

The new cable car - estimated cost 105 million euro - is a merge of cutting-edge design and engineering that blends together glass and iron: a number of terraces will be suspended above the Pointe Helbronner void to fully exploit the little space available. On the top a big, circular, 14m terrace will allow a 360° view onto the Grand Jorasses, Vallée Blanche and Dente del Gigante, Dent de Geant, the Giant's Tooth. Tourists - about 300,000 per year - will be transported upwards in round, spinning air-conditioned cabins. From Portal d'Entreves the cable cars will first reach the Pavillon du Mont Frety station and then Pointe Helbronner. Following this, a vertical tunnel, 70 m high and excaveted into the rock will have the dual function of anchoring the station to the rocky substrate as well as hosting emergency stairs and elevators that connect the pedestrian tunnel to the Torino Hut.

After leaving Courmayeur and its futuristic scenarios we now travel by bus to Cogne. I have a childhood memory related to this small and cozy village: a school trip with a nature guide who explains the difference betweet larch, spruce and pine trees. But what always strikes me here are the Sant'Orso meadows - recently awarded with the "Wonder of Italy" recognition. A white blanket of snow in the winter, a blooming party of flowers in the summer: according to the time of year, these meadows transform from cross country pistes to nordic walking trails or mountain bike routes in a constant search for the right mix between sustainable tourism and a safeguard of the area's natural resources. You can't talk about Cogne without mentioning Italy's oldest Natural Park: the Gran Paradiso. For it is here in Cogne that the Fondation Grand Paradis has its headquarters.

The foundation was born in 1997 and has always been focused on nature tourism. A new projectwas launched recently dedicated to sustainable mobility - RIDE Gran Paradiso - with the specific focus on an electric bike-sharing powered by solar energy charger system. "Our tourist season is quite good in summer but in the winter we suffer due to the relatively short amount of time available" says Luisa Vuillermoz, director of the Fondation Grand Paradis "Cogne is famous for its cross-country ski trails while the downhill area is limited. Our efforts are directed therefore at stretching the tourist season as much as possible, and electric mobility in the mountains is a challenge we are happy to embrace.” An existing project to build a train service betweet Cogne and Pila, leveraging on the old miners' tunnel, has been dropped by the Region while a possible connection between cable cars is currently being studied. The municipality has therefore decided to invest in a number of e-bikes that tourists can use for free: "The project has been positively embraced by the local community here and many people chose to buy an e-bike for themselves and use it every day" says Cogne's Mayor Franco Allera. Not only: in order to support trekking activities in all the neighboring valleys, The Fondation Grand Paradis together with the Mont Avic Natural Parc has set up the "Giroparchi Trekbus" an on-demand bus service allowing trekkers to plan routes without having to return to the departure point.

So, the morning after our arrival in Cogne we take these buses to reach the Sogno di Berdzé Hut and then we go for a walk to Lake Miserin and to Dondena Pasture high up in the Champorcher valley. We are honoured to be accompanied by Italian alpinist Abele Blanc who in April 2011 reached the summit of Annapurna, his 14th 8000m peak. In spite of this, when I ask him about the ascent to Punta Rossa della Grivola he answers: "There is nothing easy in the mountains". Good point! Also with us is Marco Onida, former sercretary of the Alpine Convention who worked hard to raise awareness about the work of the Convention and its protocols among the different areas and the instutions who have to cope with the issues related to the mountains.

There is still a lot of snow at the Fenetre de Champorcher Pass and Lake Miserin is still frozen. After a break at the Miserin hut tasting the local specialties we start our descent towards Dondena, where fields and pastures are blooming with gentians, buttercups and the first edelweiss. From Dondena we call for the bus and reach Aosta. Then, by bus, we head to San Remy and Bosses. From Saint Remy will start the last part of our travels between Via Alpina and the Walser culture. Stay tuned!

Gran Paradiso Film Festival
Water and water related issues are the focus of the 2013 edition of the Gran Paradiso Film Festival, one of the most relevant cinematographic events in the Aosta Valley. Aimed at giving visibility to the naturale movies and to raise awareness about environmental issues, the festival – see all the movies here - includes a series of events and conferences about science, nature and environment related issues. Form August 26th to August 31st in Cogne, Rhemes-Saint-Georges, Valsavaranche, Villeneuve e Ceresole Reale